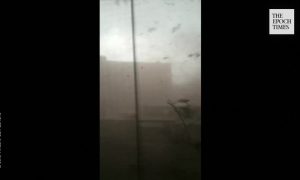 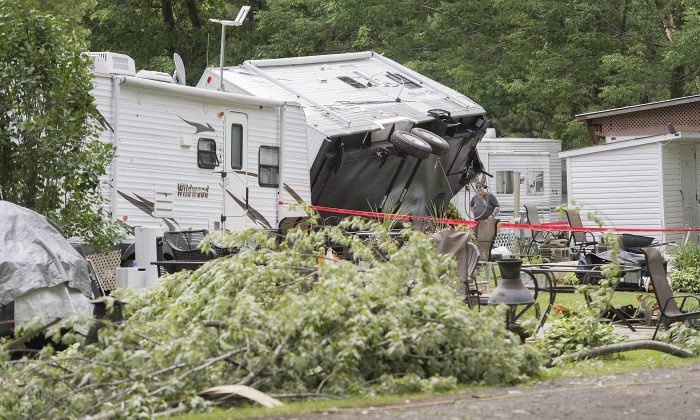 An overturned trailer and fallen trees are shown following a storm at a campground in Saint-Roch-de-l'Achigan, near Montreal, Que., on July 12, 2019. (Graham Hughes/The Canadian Press)
Canada

A ferocious Quebec storm that knocked over trees, flipped trailers, and caused more than 100,000 Hydro-Quebec customers to lose electricity has been confirmed to be a tornado by Environment Canada.

The usually tranquil grounds of Camping Horizon, located 50 kilomteres north of Montreal in Saint-Roch-de-l’Achigan, were disrupted by strong winds on Thursday evening that caused considerable damage. Around 25 trailers at the campsite were affected, and at least one person sustained a non-life-threatening injury.

Meteorologists working with Environment Canada were sent to investigate on Friday morning, July 12. By midday, the agency had confirmed that the storm was in fact a category EF-1 tornado.

According to the meterologists’ report, the tornado produced winds of between 135 and 175 kilometres per hour, and caused damage to several recreational vehicles as well as buildings on surrounding farms. There were also reports of uprooted trees, broken branches, and fallen hydro poles.

Fortunately, most of the people in the area were not present at the campsite during the storm. They had been attending a town hall meeting, which was later interrupted as phone calls began pouring in about the destruction at the campground.

The residents believe the number of injuries would have been far greater had they not attended the meeting.

“[There was] a lot of fear when it happened,” owner Alex Caron said in an interview with the National Post. “People were scared, now they’re looking at the damages and people are pretty distraught because it’s part of their life, these trailers. It becomes their residence in the summer and some people have lost them completely.”

Caron went on to say that he has seen strong winds at the site before, but never as strong as those on July 11.

The powerful tornado did not only affect Camping Horizon, however. Pierre Elliot Trudeau International Airport reported that lightning disrupted several arrival and departure flight schedules, resulting in a significant number of delays and cancellations.

Hydro-Quebec has been working to restore power to its customers across the province. At the storm’s peak, a reported number of 105,890 households were experiencing blackouts. On Friday morning, the company announced on Twitter that more than 85 percent of those affected have had their service restored.

Quite the evening in Pointe-Claire. Cartier av was closed for hours, trees and power lines knocked down. I know we’re all frustrated, but think about how hard those @hydro_customer @hydroquebec crews are working tonight! PS I’d love my power back, thanks! #storm #Quebec pic.twitter.com/Xk6OQdWDyG

Environment Canada has stated that tornadoes are not unusual in the province at this time of the year. “Right now we’re just in the summer times so it was quite warm, very humid yesterday—good conditions to create a tornado,” meteorologist Simon Legault told CTV News.

Even so, Legault noted it was only in the area of the campground that the winds were unusually strong.

“It’s only around here that we seem to have this kind of damage. Other places in the province, in Quebec, we had power outages and damage by the wind but not that kind of intensity.”

On Friday, the residents at Camping Horizon were in the process of cleaning up after the tornado.