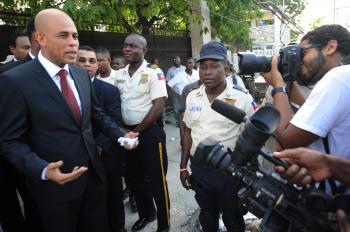 Angela Wang
View profile
Follow
biggersmaller
Print
Michel "Sweet Micky" Martelly, 49, one of the most popular musicians and composers of the compas music genre, a of type Haitian dance music, announced that he is running for the country’s upcoming presidential election in November.

He became the second musician in line for presidency alongside Grammy-winning American-Haitian artist Wyclef Jean. Jean, who made his fame in the 1990’s with hip-hop band Fugees before going solo, announced his candidacy Aug. 5.

In a marked change from his usual look as an outspoken, engaging—known for wearing diapers or wigs on stage—Martelly donned a suit before filing his last bits of paperwork.

For the past 22 years, Martelly has been a popular artist of compas music in Haiti. His hit debut “Ooh La La,” featured innovative changes to the genre.

While touring across Haiti and abroad, Martelly and Jean became acquainted years ago.

"Me being on top of Haitian music, them being on top of the world, we started hanging out," Martelly said of Jean’s band. Later, Martelly was invited to join the Fugees at the MTV Awards in London.

Though he acknowledges his friend’s enthusiasm, Martelly believes that Jean’s inability to speak French, one of Haiti’s official languages and that fact that he spent all his adult years in the U.S. play against him in the campaign.

{etRelate 40350} Jean was born in Haiti, but moved with his family to Brooklyn, New York at the age of nine and has lived in the U.S. since then.

Jean, however, has been an active advocate of development in his homeland. In 2005, he founded Yéle Haiti Foundation to provide scholarships for Haitian kids after Hurricane Jeanne tore across Haiti.

Martelly had brief stints in three colleges but never got a degree. While Martelly has no experiences in politics, he says his mind was made long ago. “If I run for anything someday – if – I'm going to aim straight at the presidency," he told The Palm Beach Post three years ago.

Martelly told AllHipHop.com that his priorities after becoming the president will be employment and education assistance for the homeless who suffered from the deadly 2010 earthquake.