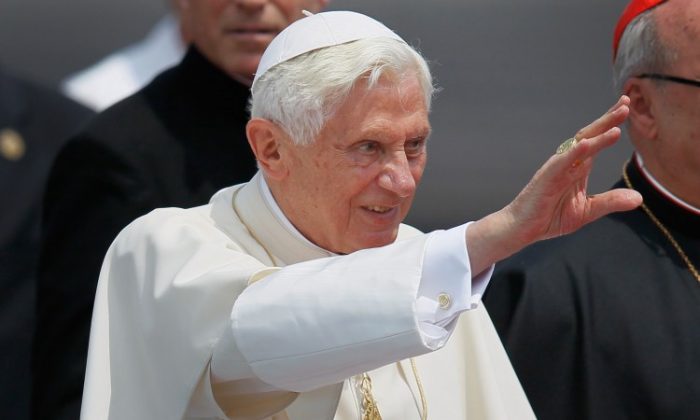 Pope Benedict XVI (2nd R) waves as he walks to his car during a welcoming ceremony after arriving at the Jose Marti International airport on the second day of his three-day visit on March 27, 2012 in Havana (Joe Raedle/Getty Images)
US

Cuba should “strive to build a renewed and open society, a better society, one more worthy of humanity,” Pope Benedict XVI said during his trip to the communist island nation on Tuesday, according to media reports.

Benedict, who several days ago said that communism and Marxist principles don’t work anymore in Cuba, delivered his speech in the city of Santiago, according to the MercoPress news agency. Cuban leader Raul Castro and tens of thousands of people amassed in the square where the pontiff spoke.

“I carry in my heart the just aspirations and legitimate desires of all Cubans, wherever they may be,” Benedict said, noting the “sufferings” of prisoners and their families, possibly making reference to the political prisoners jailed in the country. He added, “Many areas remain in which greater progress can and ought to be made.”

Before the speech, one man shouted, “Down with communism” before he was arrested, reported the BBC.

On Friday, speaking in Mexico, the 84-year-old German pope had said that communism “no longer corresponds to reality.”

Opposition and rights activists have said that scores of activists and dissidents were arrested ahead of the pope’s visit to the country.

Human Rights Watch American Director Jose Miguel Vivanco said there were “arrests, beatings, and threats against dissidents,” which underscores that “the Cuban government will do everything in its power to quash any dissent while the world’s attention is on the island.”

“These repressive acts underscore just how little space there is in Cuba for any view that doesn’t align with the Castro government,” he added.

After the open air Mass, Castro addressed the crowd, once again highlighting the litany of American injustices toward Cuba including the half-century-old trade embargo against the island nation.