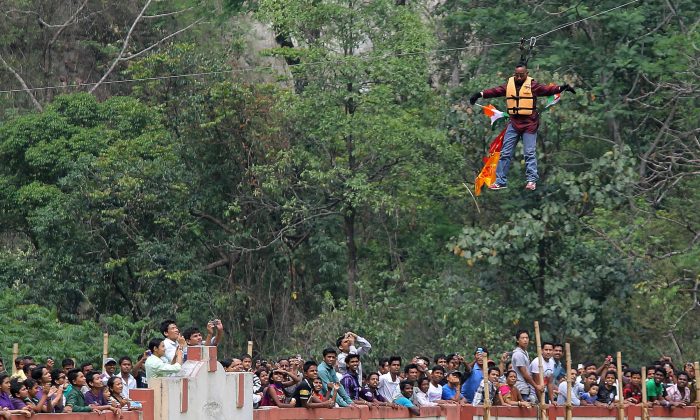 Indian stuntman Sailendra Nath Roy is watched by onlookers as he hangs on a rope while attempting to cross the River Teesta on the outskirts of Siliguri on April 28, 2013. (DIPTENDU DUTTA/AFP/Getty Images)
India

Ponytail stunt death: An Indian daredevil died during a botched stunt that involved him going across a zipline with his ponytail.

Sailendra Nath Roy, 49, held the Guinness World Record for covering the most distance on a zipline hanging by his hair.

But when he tried to cross the River Teesta on Sunday in West Bengal on a 600-foot-wire above the water, he hit a snag.

His hair got caught halfway and he could not move. Roy started screaming as he tried to inch forward, according to witnesses.

After around 20 minutes, he went limp and was rescued by local people. He was declared dead by a suspected heart attack when he was sent to a hospital 280 miles away.

The BBC reported that Roy hung by his hair for around 45 minutes  before he was taken down.

“He was desperately trying to move forward. He was trying to scream out some instruction. But no one could follow what he was saying. After struggling for 30 minutes he became still,” said Balai Sutradhar, a photographer covering the event, told the BBC.

Police said that Roy had not been given permission to carry out the stunt.

“His wife used to urge him to quit doing dangerous stunts. Mr Roy convinced her that crossing the Teesta river would be his last. Unfortunately, that became his last stunt,” a friend, who remained anonymous, told the broadcaster.

Roy in 2008 pulled the Darjeeling train with his ponytail and in 2007, he used his ponytail to fly from one building to another.