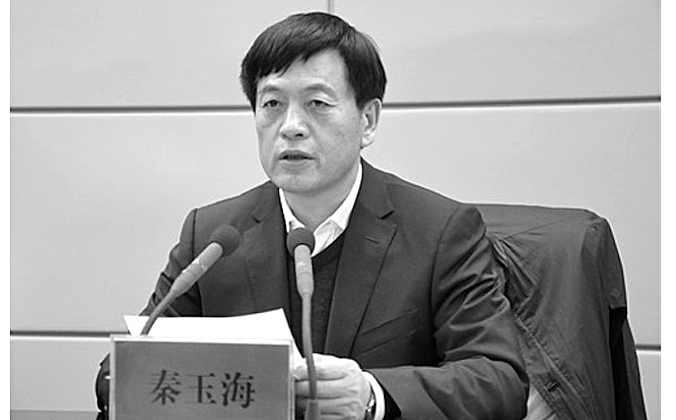 Qin Yuhai, Party Secretary and vice director of the standing committee of the National People’s Congress in Henan, has been put under investigation on charges of violating Party discipline. (Screenshot from Henan Government website)
China

A factional associate of the Chinese Communist Party’s imperiled former security czar, Zhou Yongkang, has recently been placed under investigation for “serious violations of discipline and law” by the regime’s anti-corruption agency, according to an official announcement.

Qin Yuhai, the Party secretary and vice director of the Standing Committee of the National People’s Congress in central China’s Henan Province, is the highest ranking official from that province to be investigated by the Central Commission for Discipline Inspection, the Party’s anti-corruption task force. The announcement that he was being investigated came on Sept. 21.

Though there is at present little public evidence of a direct relationship between Qin and Zhou Yongkang, aspects of his political career, and the circumstances of a significant promotion and career shift for Qin, are suggestive of a strong political and factional alignment.

Most saliently, both officials dedicated much energy to pursuing the campaign to persecute the Falun Gong spiritual practice, which was launched in 1999. The active participation of Chinese officials in that violent political campaign has often been a litmus test for their factional and personal affiliations in China over the last 15 years.

From Petroleum to Security

Qin was moved from a post in the petroleum sector—which Zhou Yongkang ruled over—to one in the security offices, one year after Zhou gained a high level position in the Ministry of Public Security.

Zhou, the highest-ranking Party official to be punished in a generation, is currently in custody on charges of violating Party discipline, and is expected to be tried in the near future.

The basis of the relationship between the men is significant, because many of the officials that Xi Jinping, the Party leader, has been purging in his anti-corruption campaign over the last at least 18 months have been united in a similar way: allegiance to Jiang Zemin, a former Party leader, and to his policies, most prominently his crusade to persecute Falun Gong. A vast network of officials like Qin were established across China, in local areas and in the central administration, and Xi Jinping is still in the process of rooting them out.

Qin’s career in the Party began in the Communist Youth League in Heilongjiang, in China’s far north. He worked in the oil industry in the city of Daqing, Heilongjiang, where he became deputy secretary of the Daqing municipal Party Committee and a member of the Standing Committee of the Oil Management Bureau.

According to Beijing News, anti-corruption officials gained incriminating information on Qin in part during an inspection tour through Henan Province from March 28 to May 27, after which more than 20 officials came under investigation, including Meng Gang, chief of the municipal Public Security Bureau of Xinxiang City and Mao Zhibin, former president of Henan Police College.

While Qin held various posts in the oil industry in Heilongjiang, Zhou Yongkang was vice minister of the Ministry of Petroleum from 1985 to 1988. And when Zhou became Minister of Public Security in 2003, Qin was soon given a public security post in Henan the following year.

According to the World Organization to Investigate the Persecution of Falun Gong–a nonprofit organization that researches the Communist Party’s security and propaganda campaign against the practice–Henan Province was among the most severe in prosecuting the campaign.

The Jiaozuo Daily, the state-run newspaper published by the city government, also reported a visit by Qin to the Jiaozuo City Education-Transformation Base on June 10, 2003. Qi said that that the fight against Falun Gong was “a grave political battle. It’s a smokeless battle vying over the masses, vying for the ideological battleground. In this struggle, through the collective efforts from the entire city … we have gained a preliminary victory.”

This “victory” consisted of the detention and physical and psychological torture of Falun Gong practitioners in Henan, as part of the attempt to have them abandon their religious beliefs.

“More effort must be put into the transformation education of Falun Gong practitioners, for the purpose of better social stability in the city … and facilitating the overall economic development of the city,” Qin said, as quoted in the same article.

“Transformation” is the official term used to refer to the process of forced ideological conversion of Falun Gong adherents, where they are expected to renounce their practice of Falun Gong and pledge allegiance to the Communist Party. Often it is attempted through torture with electric batons applied to sensitive parts of the body, starvation, sleep deprivation, and tying the victims in painful positions for days, which can sometimes result in permanent crippling.

A range of other miscarriages of justice were reported during Qin’s tenure in Henan, causing an Internet user, with the name “Three In Three In,” to remark: “The 10 years when Qin was deputy governor of Henan, secretary of the Political and Legal Affairs Commission, and head of Public Security Bureau was fascist rule for 10 years.”

With research by Frank Fang. Written in English by Matthew Robertson.