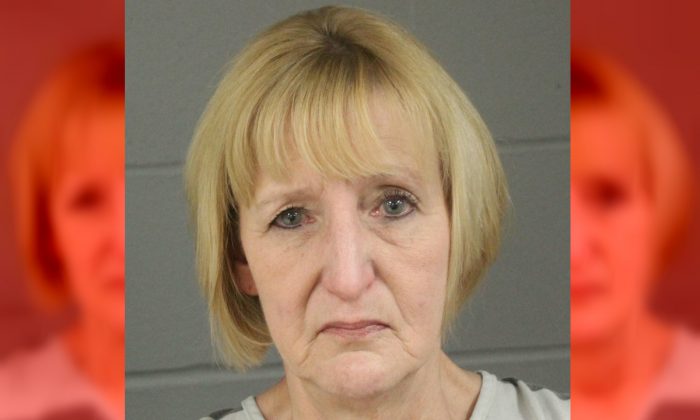 Theresa Rose Bentaas, in a booking photo released on March 8, 2019. (Minnehaha County Jail via KELO via AP)
US News

Police Trace Mother of Newborn Found Dead in Ditch 38 Years Ago, Charge Her With Murder

The thought of the newborn baby, lifeless in a ditch, tears frozen on its face, still haunts the man who spotted him wrapped in a red blanket on the side of a South Carolina highway 38 years ago.

“To see a child thrown away like that—how could someone do that,” Lee Litz said in 2016, as he told local media that he still visited the grave of the unknown child. “Someone got away with murder.”

Police have tracked down the mother of the child whose death has transfixed the city of Sioux Falls for decades. She confessed to abandoning him by the roadside where he gradually succumbed to death through exposure.

Authorities announced on March 8, that they had charged Theresa Rose Bentaas, 57, with murder and manslaughter in the 1981 death of the infant, known as Baby Andrew.

She said she had hidden her pregnancy from friends, family and even the father, according to a court affidavit cited by AP. Bentaas gave birth to the boy alone in her department, then drove to the cornfield ditch where she abandoned him.

Police said they used DNA and genealogy sites to determine she was the baby’s mother.

Bentaas, who was 19 at that time, later married the infant’s father, the Argus Leader reported, who faces no criminal charges in the matter. The couple have two living adult children.

Father Saw ‘Bump, Then No Bump’

Using birth records and marriage records, they finally traced the lineage back to Bantaas. They obtained a search warrant for a DNA sample, which determined she was the mother.

These pictures were on display during the press conference. The one in black and white is of the scene in 1981 when officers were there after the baby was found. The second is the baby’s grave at St. Michael’s Cemetery. @ksfynews pic.twitter.com/JyjecYwyoY

According to a court affidavit, obtained by the Argus, Bentaas saw the coverage of Baby Andrew on the news but said she “was in denial that she was the one responsible for that.”

She told police interviewers that she still thinks about the baby when she drives by the area.

The father of Andrew, Dirk Bentaas, is not facing charges.

He admitted he saw she “had a bump and then no bump” around the time Baby Andrew was found, during a police interview in 2019.

“(Dirk) Bentaas admitted to hearing about (Baby Andrew) being found but did not believe the defendant was capable of doing such an act,” the affidavit read.

Public genetic genealogy databases are the DNA-powered equivalent of family tree sites that use DNA instead of public records to put together family trees and trace distant relatives.

Cold-case detectives have used them in recent years to successfully track down criminals, creating fake profiles with real DNA samples from crime victims or scenes.

For example, the capture last year of the suspected Golden State Killer in northern California was achieved through a fake profile on GEDmatch. A businessman was arrested recently,  accused of fatally stabbing a Minneapolis woman in 1993, after a similar DNA-trace.

But the method has stirred controversy, raising concerns over privacy and the ability of big data to join the dots where no explicit permission has been granted.

The grave of Baby Andrew is uncovered with items left on it at St. Michael’s Cemetery. The baby was buried there on March 7th, 1981. @ksfynews pic.twitter.com/BKO3dsWiNW

The body of Baby Andrew was found by Lee Litz while cruising in the passenger seat of a friend’s new jeep on Feb. 28, 1981.

Litz spotted a wine-coloured blanket lying in a ditch. But when they pulled over, he found the lifeless infant swaddled inside.

Litz’s was one of around 50 locals who attended the baby’s funeral, and still visits the baby’s grave.

“I sure would have adopted him rather than see him die like that,” Litz told the Argus Leader in 2017.