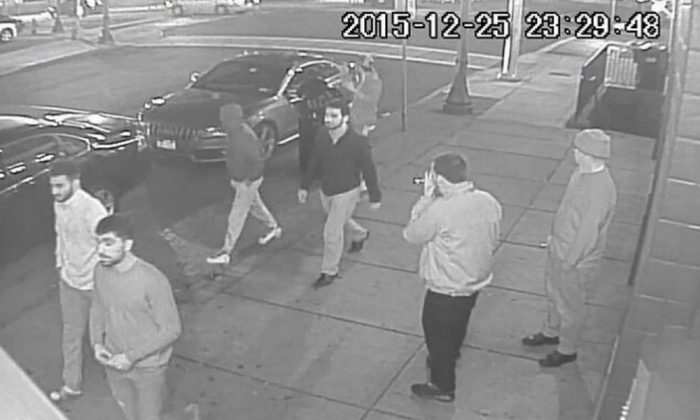 Police in Syracuse have released photos of five men who are suspected of beating two men who said they had confronted the group for harassing a homeless person on a downtown street.

A 29-year-old man and a 30-year-old man told police they intervened when the five men were verbally harassing someone around 11:45 p.m. Friday, or Christmas Day. The two men said a short time later the group drove up in a car, began arguing with the pair and then attacked them.

Officials say the victims spent the night at a friend’s house before seeking medical treatment Saturday.

On Tuesday police released photos of the five suspects and their BMW sedan taken from video surveillance cameras.

Local media have reported that Joe Grosvent and his cousin James McElyea were the victims. McElyea suffered a fractured skull.

You probably know by now, but on Christmas night, my brother & cousin were jumped near Hanover Square. Joe is healing…

“Joe suffered minor injuries, while James suffered a much more severe [assault], taking repeated blows the the head and fracturing his skull. This resulted in the formation of a bruising and a blood clot to the brain & has a lot of recovery ahead of him. So now we are asking for help for him, his wife and four children while he is away from home and work for over the next few weeks,” the page says.

Police said the suspects were described as “Middle Eastern” and were “well-dressed,” with dark hair and trimmed beards, LocalSyr.com reported.

They were riding in a BMW four-door sedan, which was white or silver.

Syracuse Police are now looking to get video from surveillance cameras and are asking people with information to call the Syracuse Police Department at 315-442-5222.