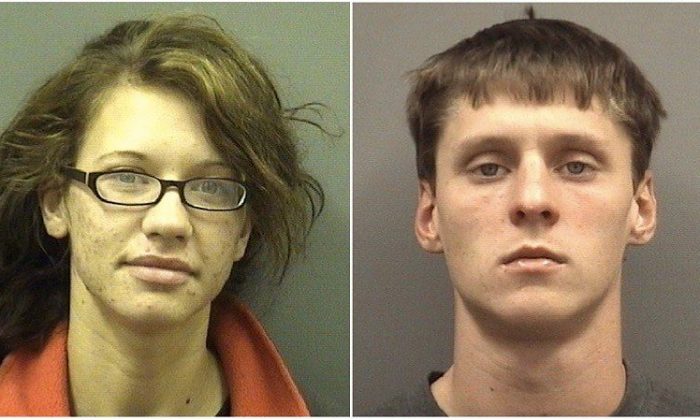 Police: Couple Passed out From Heroin in Hot Car With Small Child

A North Carolina couple has been accused of injecting heroin while a baby was still in the vehicle.

Salisbury Police officer O.M. Szentpaly was at a gas station when she noticed a vehicle in a car wash. She spotted a couple passed out in a hot car.

The officer filled the car with gas and walked over to check the couple inside the car. They appeared to be “looking down,” a police report read.

The couple was later identified as Jessie Lee Hastings, 27, and her husband, David Wayne Hastings, 31, who are both from Woodleaf, North Carolina. The report said David was passed out with a syringe in his hand. Jessie was also passed out.

Szentpaly, however, noticed a child in the car seat in the back “wet with sweat.” The couple’s car air conditioning was not working and the windows were rolled down.

Higher Risk of Death With Opioids Than Other Painkillers

“Both of the parents were in the front seat, one of them had an injection needle still in her arm,” Thompson said. “The child was in the backseat, a young toddler about three years old. The child was sweating profusely because it was so hot outside. The windows were down but the child was crying and trying to kick the back of the seat to wake the parents up, which was very disturbing.”

The couple were both charged with drug possession, possession of drug paraphernalia, and child abuse.

Their story, which was picked up by several national websites, underscores the pernicious nature of America’s heroin epidemic.

The U.S. Centers of Drug Control and Prevention said that in 2014, more people died from heroin overdoses “than in any year on record,” adding that the “majority of drug overdose deaths (more than six out of ten) involve an opioid.”

Also, there were 18,893 deaths involving prescription opioids in the United States in 2014, representing a 16 percent increase over 2013, according to the National Center for Health Statistics.

Meanwhile, 78 Americans die every day from opioid overdose. The reason why, the CDC explained, is because “heroin use has increased sharply across the United States among men and women, most age groups, and all income levels. Some of the greatest increases occurred in demographic groups with historically low rates of heroin use: women, the privately insured, and people with higher incomes.”

Every summer, police and health officials issue warnings about the perils of leaving children or pets inside a car during hot weather.

On average, about 37 children die every year from heat-related deaths after being trapped inside a vehicle.

On a 78-degree Fahrenheit day, the temperature inside a parked car with no air conditioner on can soar to between 100 and 120 degrees in minutes, health officials warn. On a 90-degree day, inside temperatures can reach well over 120 degrees Fahrenheit.

“On a day that is just 72 degrees Fahrenheit, the temperature [inside a car] can increase by 30 to 40 degrees in an hour, and 70% of this increase occurs the first 30 minutes,” Christopher Haines, head of pediatric emergency medicine at St. Christopher’s Hospital for Children in Philadelphia, told WebMD.

The National Highway Traffic Safety Administration says that if one sees a child alone inside a potentially hot car, call 911 right away. “If they are in distress due to heat, get them out as quickly as possible,” says the NHTSA’s website.