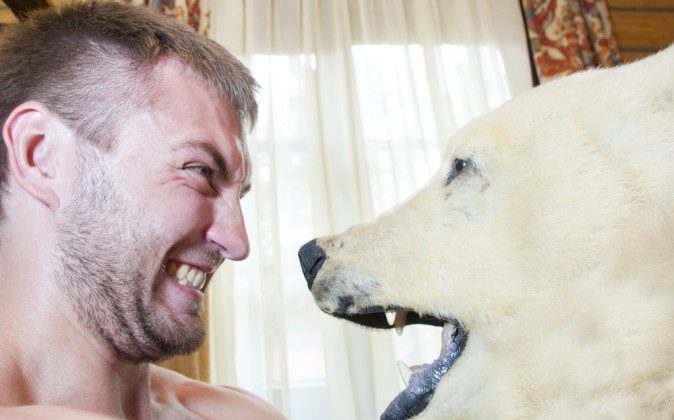 Man says: "I am not your lunch"! (Shutterstock*)
Environment

Polar Bear Leaves the Ice. How to Deal With Them Inuit Style

As the climate continues to change, the polar bear’s range moves south as the planet continues to warm. This means that we should expect more human encounters with the polar bear. This can be a problem for scientists working in these regions. Enter the Canadian bear expert, Andy McMullen, a Canadian 35 year veteran who teaches Dartmouth scientists about bear behavior before they embark upon studies in bear country.

According to Erich Osterberg, assistant professor at Dartmouth, because field conditions have changed some Dartmouth scientists in Greenland now carry rifles and hire guards for polar bear protection where polar bears were once rare hence the need to solicit McMullen’s expertise.

McMullen knowledge is from the old folks who used to hunt them with a spear. He says, “Inuit elders say the simple sight of the bear is not a call for panic, but it is easy to panic if you are not armed with knowledge. If you don’t know how to avoid them or what to do or how to interpret their behavior, you’re stuck.” In other words, the key to not getting eaten is packed in the power of knowledge.

But McMullen has a high regard and respect for the polar bear, Ursus maritimus. “They are gymnastic bears,” noting their ability to leap among the ice floes. “They are very powerful swimmers. They are highly intelligent animals, and their sense of smell is legendary.”

The polar bear is almost exclusively carnivorous, and the ice, their preferred habitat, is their hunting platform. When the pack ice melts they come ashore, making it the most dangerous time in the north—with the highest risk of an encounter.

McMullen says polar bears tend to approach cautiously. “If you remain quiet and don’t do anything, the bear will come closer to try to figure out what you are. The idea is to let it know you are human as soon as you can. All you have to do is talk,” says McMullen. “The human voice is probably the best deterrent there is, and I take mine with me everywhere I go,” he jokes.

Polar bears want seals, their diet preference, not humans. Human encounters are likely based on curiosity, signaled by the animal sniffing the air, stopping, and starting, standing on its hind legs or displaying defensive behavior such as huffing and puffing, growling or stomping. McMullen advises to not make eye contact or run but back away slowly without, shouting or making sudden moves.

This article was originally written by Robin Blackstone, a contributing writer for the Environmental News Network. Please click HERE to see the original article and more information.