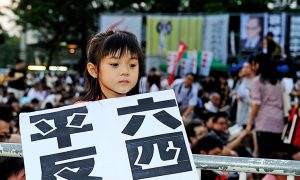 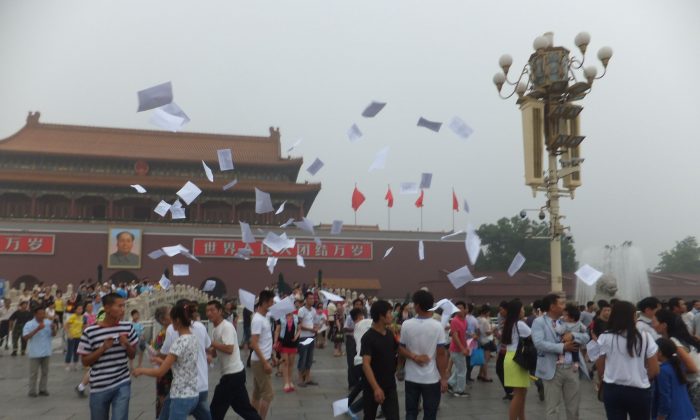 The Reddit user wrote as a caption: Snapping pics of The Gate of Heavenly Peace when suddenly about two dozen people simultaneously started shouting and throwing flyers in the air. I couldn't believe my eyes: was this what I thought it was? (Tiananmenthrowaway)
China

A social media user posted photos on Reddit on July 4 of what he said were two dozen Chinese protesters shouting and tossing up flyers in Tiananmen Square, along with fast-acting cleaning crews and a slew of undercover police who quickly quarantined the area and pulled the offenders into waiting vans.

In the midst of a crowd, Chinese men and women threw up white half-sheets of paper with different faces printed on them and Chinese text that the user couldn’t read. Passersby immediately ran from the scene once they saw what was going on. It is unclear what the protest was about.

Authorities, including military, police, and sanitation workers, gathered to confront the protesters. Blue clothed workers cleaned up the flyers, stuffing them in a black garbage bag while police drove protesters away in vans. The user, writing under the alias “tiananmenthrowaway,” posted a link to the photos on Reddit, a social news website where users review and remark on content submitted by others.

“Was half the crowd plainclothes police?” the user wrote in a photo caption, describing his shock at the huge number of police that suddenly materialized.

People who had been recording the incident on their phones were approached by police, but the Reddit user managed to evade authorities, later writing in a photo caption, “I’ve never been more terrified in my entire life.”

The user, who remains in China and is cautious of police, explained on Reddit that he hoped “some news outlet will pick this up and some politician will ask questions.”

He added, “This has to be something major for these people to knowingly get themselves arrested just over the faint hope that someone visiting might hear their voice.”

The user ended his five photo gallery with a photo of the Tiananmen street lamps. Each lamp had around five cameras attached in different positions, prompting one Reddit user to comment, “They could make an easy book cover for 1984,” referring to George Orwell’s classic dystopian novel that details a world under constant surveillance by a totalitarian state.

Also noted was the cloudy look in the photos, to which another Reddit user wrote, “The air pollution is horrid. You couldn’t pay me to go there. It’s such a shame.”