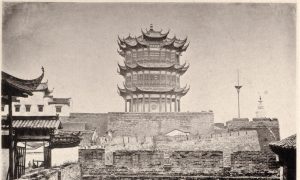 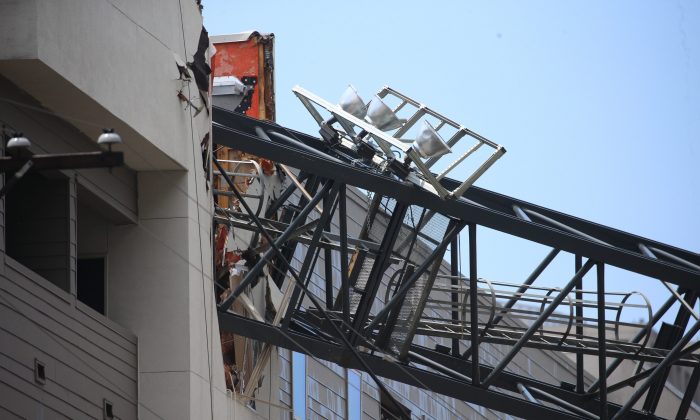 Officials respond to the scene after a crane collapsed into Elan City Lights apartments amid severe thunderstorms in Dallas, Texas on June 9, 2019. (Shaban Athuman/The Dallas Morning News via AP)
US News

At least one person died and six were injured after a crane fell on a Dallas apartment complex and parking garage on June 9.

The crane collapsed amid severe weather in the area. The U.S. National Weather Service says the Dallas-Fort Worth area is under a severe thunderstorm watch.

Six people were taken to nearby hospitals, CBS Dallas reported, adding that one person died. Two people were in critical condition, three were in serious condition, and one suffered a minor injury.

At Least 1 Dead In Crane Collapse In Downtown Dallas, Reports Of Storm Damage Throughout North Texas

WATCH: Video from @soph_daigle shows the moment a crane collapsed in Downtown Dallas. At least one person is dead and six others injured.

“Multiple resources, to include Fire Operations, Emergency Medical Services, Urban Search and Rescue and Hazardous Materials assets, have been dispatched to the scene to help mitigate the situation,” Dallas Fire and Rescue said in a statement to CBS News.

Photos posted on social media showed that the crane destroyed part of the roof and a wall. Damage to vehicles could be seen.

Most insane thing I’ve ever experienced. massive crane blew over into my complex. Missed my unit by 2 doors. I’m hearing no casualties. Hopefully that holds true. pic.twitter.com/FbpseQLxs8

WATCH: Video from @soph_daigle shows the moment a crane collapsed in Downtown Dallas. At least one person is dead and six others injured.

Dallas Fire-Rescue spokesman Jason Evans told CNN: “This is a really challenging situation in the sense that I cannot personally recall that we’ve had a crane collapse that involved an already inhabited building.”

Fire officials deployed rescue dogs to the scene to look for missing or injured people.

NEW VIDEO from an eyewitness at the apartment complex on the east side of the Dallas skyline badly damaged by a falling crane in this afternoon’s severe thunderstorm. (Warning about the language.) pic.twitter.com/6hKUGFEUOy

“Our hearts go out to everyone who has been impacted by this incident. We only hope that the damage that’s been inflicted thus far is where it stops,” he told the news outlet.

Abbey Kearney told CNN that she lives in the apartment complex.

“It was like a sunny, beautiful day and people were at the pool,” she said. “And then it just got dark very quickly and the wind picked up something fierce. It got dark and it was over in a matter of seconds.”

Describing when the crane fell, “It just sliced through the building … like a hot knife through butter. It went from the fifth floor to, from what I can tell, the third floor,” she told the network.

When it hit the garage, she added, “We just saw cars everywhere. I don’t even know how to describe it. There were cars that were vertical, there was cars from maybe the eighth floor all the way down into the third floor where we park.”