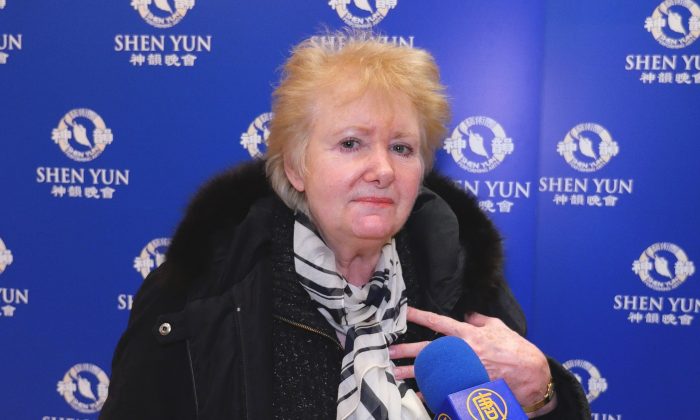 NEW YORK—Film producer-turned-photographer Angela Schapiro left Lincoln Center feeling not only that Shen Yun Performing Arts had put on an exceptional performance, but that the finale by the company “was a sort of circular ray of warmth and love. You had this feeling of everything, everything was going to be okay. … It left you with a wonderful sort of uplifting feeling.”

According to the website of New York-based Shen Yun, Ms. Schapiro experienced exactly what the company hopes audiences feel: “Through the universal language of music and dance, Shen Yun weaves a wondrous tapestry of heavenly realms, ancient legends, and modern heroic tales, taking you on a journey through 5,000 years of Chinese culture. Its stunning beauty and tremendous energy leave audiences uplifted and inspired.”

“I thought this was absolutely breathtaking. I have never seen anything like this before,” Ms. Schapiro said.

For her it was a totally unique presentation: “Based in Chinese mythology and history, … it’s also very, very modern, and the music, the compositions, the combination of both Chinese and Western [instruments] together is really, absolutely unique,” said the managing editor for the American Society of Media Photographers.

She had seen the Shen Yun ads for years and dreamed of coming, but only with a little coaxing from a friend did she finally come. Her friend told her that Shen Yun dancers often begin their training when they are 12 years old and that they study and rehearse for years before they get on stage. “And sometimes they don’t get to the stage,” she said.

She marveled at the synchronicity between the rear screen projectors and the dancers. The audience sees figures come down from the sky and then dancers become those figures on stage. “The sequence was amazing,” she said.

The solo instrumental piece, “Divine Elegance,” played by Xiaochun Qi on a 4,000 year old two-string erhu was “just like an angel” playing, she said, and the vocalists, soprano Haolan Geng, soprano and baritone Qu Yue, were so unique. The singers apply Western operatic style and yet sing Chinese lyrics.

As far as the dancers, “they made it look so effortless … they were like feathers! You couldn’t hear them on stage. They do these big jumps but you can’t hear them,” she said.

Now that Ms. Schapiro has come once and knows the Shen Yun creates a new performance every year, she’ll be back: “Now I will come every year.”