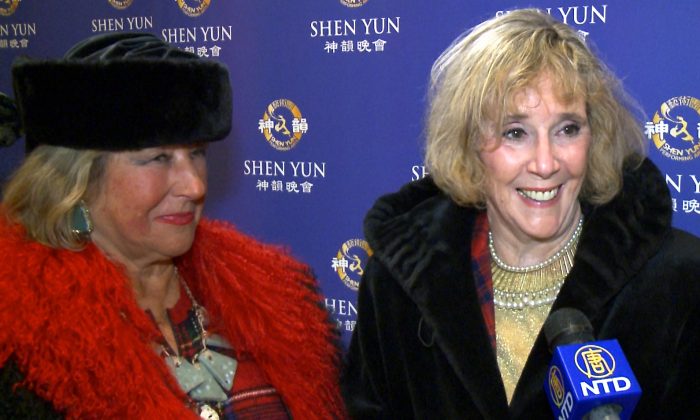 “I saw that the spirit was absolutely beautiful, the elegance of the dancers, of the performance, and the video which was absolutely fantastic,” she said. “I don’t know whoever did it, but as a photographer, I’m completely taken by it.”

Ms. Aich has traveled around the world, including to India, Africa, and South America, during her varied photography career, according to her website. Her assignments have included major campaigns for Estee Lauder, Revlon, Elizabeth Arden, and Lancaster.

Shen Yun, based in New York, travels around the world each year presenting the rich Chinese culture through classical Chinese dance, and ethnic and folk dance. The dancers are accompanied by an orchestra that melds both classical Chinese instruments and classical Western instruments, as well as digital backdrops and handmade costumes.

The integration of the digital backdrop and the dancers caught Ms. Aich’s discerning eye.

“The combination of the dance, the costume, the colors, and the video itself—that was just fantastic, the way it moved away and the way it went up in the screen,” she said. “It was fantastic, beautifully done.”

Ms. Aich was joined by her friend Margaret Sheehan, who works in human resources. Ms. Sheehan also enjoyed the performance.

“I would love to be able to move the way those ladies moved,” she said. “They were really … something you can think about when you leave— it’s so pretty.”

Steve Miller, who also attended the performance that evening, said he found the artistic direction phenomenal, and that he learned a lot from the different stories depicted. “It was wonderful,” said Miller, who works as an IT engineer.

Numerous Shen Yun mini-drama pieces feature scenes from well-known stories and legends like Journey to the West and “Monkey King.” The dances are accompanied by animated backdrops that synchronize all aspects of the performance.

“It was very spiritual,” he said. “It seemed like lifetime after lifetime, … don’t repeat the mistake or you will regret it. It was very inspiring.”