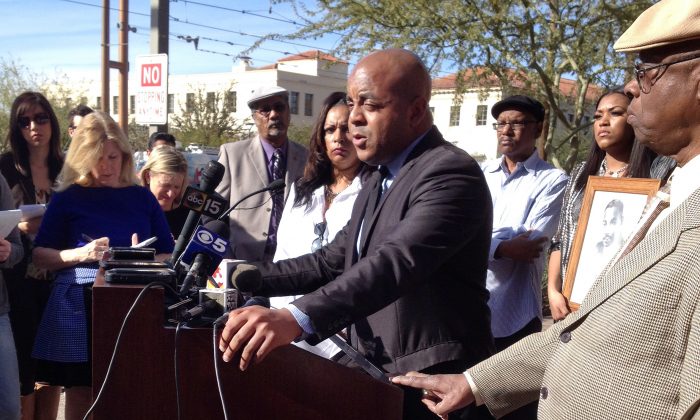 Rev. Jarrett Maupin (C), an Arizona civil rights activist, speaks during a news conference in Phoenix on Jan. 21, 2014, after an Arizona State University fraternity hosted a distasteful party in commemoration of Martin Luther King Jr. Day, replete with racist stereotypes and offensive costumes. Maupin is calling on the school to expel all students involved and permanently ban the Tau Kappa Epsilon fraternity from campus. (AP Photo/Brian Skoloff)
US

PHOENIX—A suburban Phoenix school district is taking disciplinary action after a photo of students spelling out a racial slur with T-shirts showed up on social media.

Someone shared the photo online, prompting calls to the principal.

Hanks says officials are “absolutely outraged and disappointed” and the students’ actions do not represent the student body. The students did not immediately respond to requests for comment made through social media accounts.

Phoenix-area civil rights activist the Rev. Jarrett Maupin says he and other activists plan to meet Monday with the district’s superintendent.

“The racist images and discriminatory behavior created and exhibited by Desert Vista high school students is shocking, outrageous, and should give everyone cause for concern,” Maupin said.