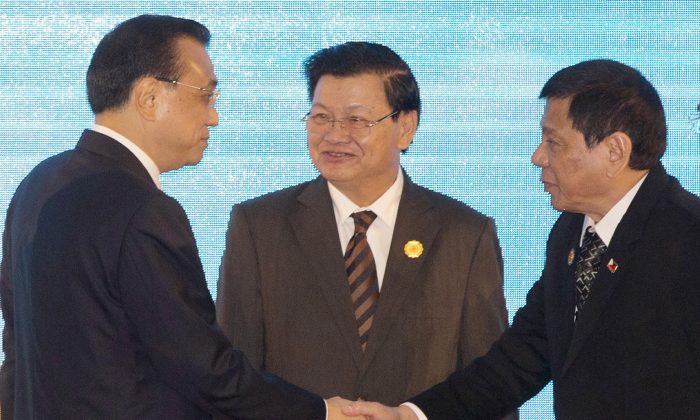 In the first few months since Rodrigo Duterte, the Philippine president who has made headlines for extrajudicial killings and profanity-laced insults, took the reins in Manila, he may have done more to anger Washington than can be expressed in an expletive.

Breaking from the explicitly pro-U.S. foreign policy of his predecessor Benigno Aquino III, Duterte has in some respects appeared to warm up to the Chinese regime during recent negotiations with Beijing.

On Sept. 15, the 88-year-old former Philippine president Fidel Ramos went to Hong Kong for a meeting with Fu Ying, head of China’s congressional foreign affairs committee, to “break the ice and rekindle the friendship,” according to Japanese financial paper Nikkei. Fu was once the Chinese vice foreign minister and also Beijing’s ambassador to the Philippines.

The meeting comes two months after July 12, when an international court of arbitration in The Hague ruled in favor of the Philippines in a case concerning China’s claims to large swaths of the South China Sea.

The verdict was clear—Beijing’s “nine-dash line” hold on the South China Sea is illegal—but despite explicit American and Japanese support, Duterte, who had been in office for only 12 days at the time, has expressed ambivalence about holding China responsible to obey the ruling. This has created an opening in the Asia-Pacific region that the Chinese could use to gradually wrench Manila further from its traditional allies, who themselves have been left in an awkward position.

According to Dr. Robert J. Bunker, a national security expert and adjunct faculty member at Claremont Graduate University, Duterte’s behavior is likely informed by his desire to “play the middle between the United States and China … to work them both for aid and investment packages as long as possible in a kind of foreign policy bidding war,” he told Epoch Times in a recent email.

By delivering a personal insult to U.S. President Obama, calling him “son of a whore” around the time of regional talks in Laos, the Philippine leader may have gotten the distance he wanted from Washington, while signalling his openness to working with Beijing as a neutral, not an American client.

Publically, Obama brushed off the affront, which came after the U.S. President condemned the summary executions of hundreds of suspected drug dealers and handlers in the Philippines. Duterte soon admitted that his words were chosen poorly, but the White House cancelled the Sept. 8 private meeting that had been scheduled for the two statesmen.

The Nikkei soon came out with multiple reports of Duterte’s potential Chinese connections. In one piece, the Japanese financial paper said that “Beijing apparently sees a potential friend in the volatile leader of a country with which it has a territorial dispute in the South China Sea.”

There are concerns that in distancing himself from the strong tone set by the international ruling on the South China Sea, Duterte, a politician better versed in administering vigilante justice than the subtleties of international diplomacy, may be setting himself up for manipulation.

“Beijing will undoubtedly attempt to take advantage of the opportunity” provided by Duterte’s sharp tongue, Nikkei reported, referencing his spat with Obama.

In the months leading up to his election, the populist had shown interest in inviting Chinese investors to develop local rail infrastructure and resource extraction. In May, Duterte called for bilateral talks with Beijing to resolve the South China Sea dispute, an approach that runs counter to the arbitration case, which was submitted to The Hague under former President Aquino III.

According to Nikkei, the Chinese willingness to talk about lavishing aid on the Philippines “reflects a strong desire to ease the international pressure Beijing is under” due to The Hague ruling.

Duterte’s ambivalent attitude towards the arbitration ruling, on which he has made no definitive comment, seems to sum up his unpredictable stance in general. To what extent he considers the ruling binding, if at all, or if he intends to alter his behavior, are hard to discern.

“Given Duterte’s tacit approval of extra-judicial killings in his anti-narcotics campaigns and disdain for the United Nations, the Hague ruling denying China’s South Sea claim may actually be quite meaningless to him personally,” Bunker said.

In a Sept. 10 report, the Nikkei quoted the Philippine foreign secretary, Perfecto Yasay Jr., as saying that his country wished for China to respect the international ruling. At the same time, he stressed the importance of allowing Beijing to save face.

“Internally [Duterte] needs to keep his supporters satisfied by highlighting the Hague ruling in favor of the Philippines while externally downplaying it during his relations with China,” Bunker said.

Duterte has shown that he treats words cheaply. When the UN criticized the extrajudicial killings that play a central role in Duterte’s hard line on drugs, he shot back saying that he would consider leaving the UN and instead form a new bloc with China and African states. He soon backtracked and said he had been joking.

Neither has he retracted his fangs in regards to China. In a meeting with Chinese envoy Zhao Jinhua, Duterte jokingly brought up the need for the Philippines to increase its military strength, the Philstar Global reported Aug. 29.

“But for now Mr. Ambassador, I want to just talk to you in the moment, maybe give us time to build our forces also. You have so much superiority,” Duterte told Zhao.

The remark is a loaded one, given China’s steady construction of fortifications and military deployments to the Philippine-claimed islands and reefs of the South China Sea.

“He has thrown a wild card into the mix,” Bunker said. “He might very well sell his backing to the highest bidder. If this is the case, the Philippines may no longer be considered a trusted U.S. ally and instead might be viewed as either a mercenary state or a non-aligned one being wooed by both sides—well, at least as long as Duterte is in power.”