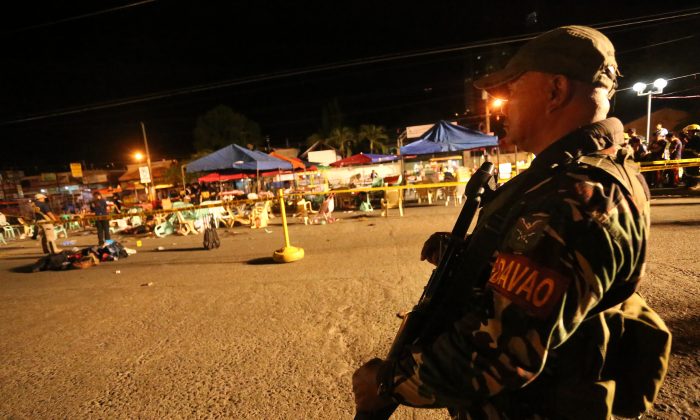 A Philippine soldier keeps watch at a blast site at a night market that has left several people dead and wounded others in southern Davao city, Philippines late Friday Sept. 2, 2016. The powerful explosion in Philippine President Rodrigo Duterte's hometown in the southern Philippines took place amid a security alert due to a major offensive against Abu Sayyaf militants in the region, officials said. (AP Photo/Manman Dejeto)
International

DAVAO, Philippines—An explosion killed 12 people and wounded at least 24 at a night market in President Rodrigo Duterte’s hometown in the southern Philippines, a region under a heightened security alert because of a military offensive against Abu Sayyaf militants, officials said.

Regional military commander Lt. Gen. Rey Leonardo Guerrero said it was not immediately clear what caused the explosion at a massage section of the market, which was cordoned off by police bomb experts and investigators.

Police Chief Superintendent Manuel Gaerlan said witnesses gave contrasting accounts, with some saying that a cooking gas tank exploded while others suggested it may have been some kind of an explosive. Police set up checkpoints in key roads leading to the city, a regional gateway about 980 kilometers (610 miles) south of Manila.

TV footage showed plastic chairs strewn about at the scene of the blast, where witnesses said the bodies of some of the dead lay scattered a few hours after the explosion. Ambulance vans drove to and from the area following the blast.

Police forces in the capital Manila went on full alert at midnight following the deadly blast.

Duterte, who served as a longtime mayor of Davao before assuming the presidency in June, was in the region but has not issued any statement. His spokesman, Ernesto Abella, urged the public to be vigilant.

“While no one has yet claimed responsibility it is best that the populace refrain from reckless speculation and avoid crowded places,” Abella said. “There is no cause for alarm, but it is wise to be cautious.”

Philippine forces were on alert amid an ongoing military offensive against Abu Sayyaf extremists in southern Sulu province, which intensified last week after the militants beheaded a kidnapped young villager. The militants threatened to launch an unspecified attack after the military said 30 of the gunmen were killed in the weeklong offensive.

Some commanders of the Abu Sayyaf, which is blacklisted by the United States and the Philippines as a terrorist organization for deadly bombings, ransom kidnappings and beheadings, have pledged allegiance to the Islamic State group. The military, however, says there has been no evidence of a direct collaboration and militant action may have been aimed at bolstering their image after years of combat setbacks.