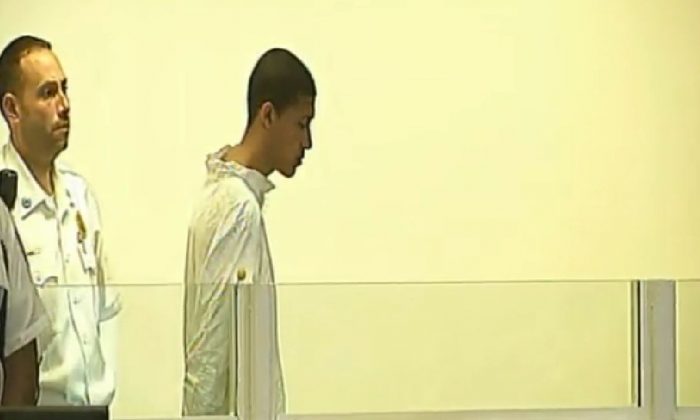 Philip Chism, 14, is seen in court on Wednesday (Fox Boston screenshot)
US

Philip Chism was charged with the murder of a Danvers High School teacher, Colleen Ritzer, according to reports on Wednesday.

According to Fox Boston, attorneys said that he will be held without bail.

He will be charged as an adult in the case, the station said. A judge approved funds for a mental health evaluation, and officials will assess if he poses a potential threat to others.

No motive for the slaying of Ritzer was given. It is also unclear how she was killed.

The body of Ritzer., 24, was found in the woods near the Danvers High School. Blood was also found in the school’s bathroom, reported the Boston Herald.

Law enforcement sources told ABC News that cameras inside the school caught a student taking Ritzer’s body from the bathroom and towards a recycling bin near the woods.

Other reports say that Ritzer was beaten to death.

Chism, who recently moved from Tennessee to Massachusetts, was spotted walking along Route 1 on 12:30 a.m, The Salem News reported.

The Danvers police Twitter account on Tuesday evening posted a photo of Chism and later said he was located safely.

The Danvers Patch website reported that Chism, 14, was initially reported missing on Tuesday night. A public alert was released by police at around 10 p.m., saying he was seen last at the Hollywood Hits Cinema. Boston.com also reported that officials were searching for Chism last night, but officials would not confirm whether it was him, citing state law.

“We are all terrified. It’s very scary,” said Danvers junior Caitlin McBride, according to Boston.com. “No one will ever look at this school the same way anymore.”

“She always wanted to teach math. Her mother, I believe, is probably a math whiz,” Duffy told the Herald. “She was a quiet, pleasant girl with many friends. She was just like the ideal daughter. She is. This family is a family of America, They are the ideal family, they are friendly, they are loving, close,” she said.

“Colleen was a bright and vibrant student in the School Counseling masters’ degree program. As a dedicated teacher, Colleen wanted to work with and help children with special needs. She believed children have much to offer and often do not realize how special they are as individuals,” school said in a statement.