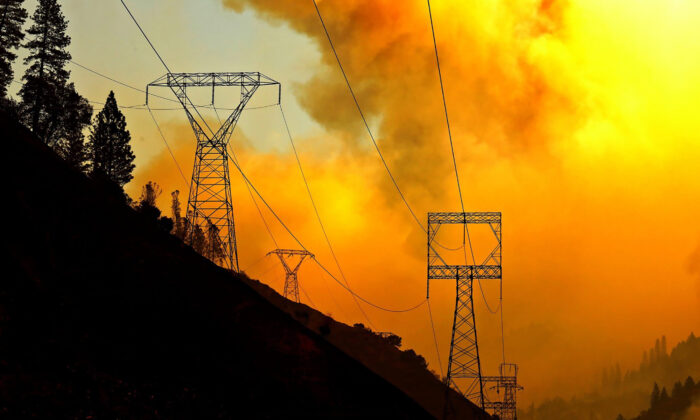 Utility companies are shutting off power to help prevent wildfires in some areas of California this week. (Carolyn Cole/Los Angeles Times/TNS)
Northern California

PG&E Shuts Off Electricity for 25,000 People in California Due to Fire Conditions

Pacific Gas & Electric Co. (PG&E) cut off power to thousands of residents in California Monday in a “safety shutoff” due to critical fire conditions.

“This safety shutoff is due to a dry, offshore wind event expected to start Sunday night and bring wind gusts of up to 50 mph by Monday morning,” a PG&E news release said on Sunday.

“As a result of this wind event, combined with extreme to exceptional drought conditions and extremely dry vegetation, PG&E began sending advanced notifications Saturday to customers where PG&E may need to proactively turn off power for safety to reduce the risk of wildfire from energized power lines,” it added.

High winds and fallen trees were reported across the area. A growing fire was reported Monday near the Reagan Ranch.

All shutoffs were reportedly expected to continue until Tuesday afternoon, according to the PG&E news release.

The decision was made following a National Weather Service red flag warning across Northern California.

The initial report included 44,000 customers in 32 counties on Saturday. A later update lowered the number of homes included due to changed weather conditions.

Many residents were inconvenienced, but the company’s actions may have been influenced due to past problems PG&E has faced with wildfires.

The precautions follow the 2019 Kinkade Fire that led to a lawsuit (pdf) against PG&E after four people died and more than 170 homes were destroyed.

PG&E equipment was also faulted in the 2018 Camp Fire that led to charges against the company for involuntary manslaughter.

The company pleaded guilty to the deaths of 84 people resulting from the incident.

“I am here today on behalf of the 23,000 men and women of PG&E, to accept responsibility for the fire here that took so many lives and changed these communities forever,” PG&E Corporation CEO and President Bill Johnson said in a statement.

“I have heard the pain and the anguish of victims as they’ve described the loss they continue to endure, and the wounds that can’t be healed. No words from me could ever reduce the magnitude of such devastation or do anything to repair the damage. But I hope that the actions we are taking here today will help bring some measure of peace,” he added.