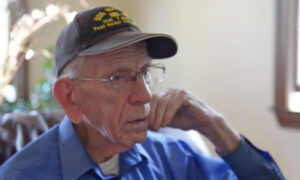 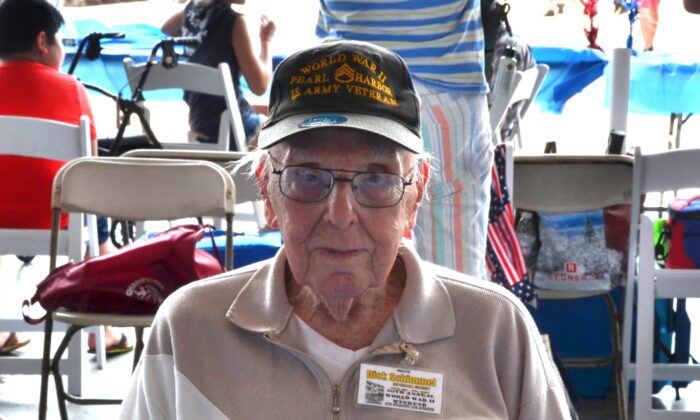 Pearl Harbor Veteran, 99, Recounts the ‘Day of Infamy’ at the WWII Weekend Event

The Mid-Atlantic Air Museum hosted its 30th Annual World War II Weekend in Reading, Pennsylvania, from June 4 to 6. It is the largest and most well-known event of its kind in the world. Temperatures soared into the 90s but the event attracted over 30,000 who paid tribute to an era of great sacrifice and homage to the surviving heroes present.

There were dramatic re-enactments, musical venues, and elaborate air shows, with many magnificently restored flying machines and tanks in tow. All theaters of war were represented. Every year, 20 veterans come to relay their first-hand accounts of their service to their country.

Richard “Dick” Schimmel, 99, from Allentown, Pennsylvania, is a veteran of Pearl Harbor and one of the first servicemen ever to work with radar. Just a few months before he signed up, the new technology had been acquired from England.

He enlisted in the Army in 1940 and was shipped out to Hawaii—his idea of a dream assignment and his first pick. A plotter and switchboard operator for the newly formed Signal Aircraft Warning Unit at Ft. Shafter, Oahu, he would joke that “radar was so new, nobody knew what it was.” However, the radar system and its students would soon be put to the ultimate test.

The night before the attack on Saturday, Dec. 6, 1941, Schimmel was relieved of duty at 6 p.m. by colleague and friend Joe McDonald. He explained that they had been taken off alert that night and that things were perceived to be very slow. The week before, they had been on alert since they didn’t know “where the hell the Japanese navy was.” But for some reason, Schimmel had decided not to go out on the town.

After McDonald’s shift ended at 6 a.m. on Dec. 7, he returned to the tent that the two men shared, waking his roommate to tell him that Japanese planes were about to attack. Schimmel didn’t know how to take this. A short time later, the situation became apparent.

Since the alert had been called off, colleagues Joe Lockard and George Elliott practiced at the radar station in Opana, Oahu. Lockard was teaching Elliott the ropes. They had noticed a lot of plane activity on the screen, so they contacted McDonald at the information center, who reported the matter to the lieutenant in command.

The lieutenant assumed that the radar screen was identifying 12 B-17s expected from California, so he did not express concern. That would put up a “nice mark” on the screen, the lieutenant said. Schimmel related that back in the day, with radar, you couldn’t tell how many planes were coming in, but the wider the blip, the more planes were coming.

There was a lot of back and forth between Lockard and McDonald as to what to do. With such intense on-screen activity, McDonald went to see the lieutenant in command to ask if he should call back the plotters to assist. The lieutenant expressed that he didn’t think so.

The radar unit’s job was to pick up plane activity and call the coordinates to the information center. The coordinates were plotted with spindles on a board, with oceans and the islands it represented that sat on a big table. This system provided an overview of where planes were detected.

The roommates rushed to the information center to offer support. On their way there, from the vantage point of a plateau, they could see all of Pearl Harbor and incoming planes.

At first, they thought the scene of planes dropping their payloads were maneuvers—a sham battle. But reality hit home when someone turned on a radio to turn in to the broadcasting from the only station in Honolulu, and they heard: “Pearl Harbor’s being attacked! It might be Japanese planes!”

Before disaster actually struck on Dec. 7, Schimmel said that he was the fifth person on the island to know that the Japanese were on their way.

In the aftermath of Pearl Harbor, Schimmel continued to work in his area of expertise in the Pacific Islands, dodging three bombings of Canton Island by the Japanese. He spent a total of 56 months overseas. He rose from Private First Class to Staff Sergeant with the 580th Signal Aircraft Warning Company.

He maintained close contact with McDonald until his passing in 1984. His buddy always wondered whether he should have “gone over the head” of the commanding officer that fateful day to have lessened the casualties. But Schimmel stressed that he did the right thing: protocol dictated that he did not do such a thing.

When Schimmel was asked if he had any regrets, he replied, only that he had one life to give to his country.

After he returned home, he pursued a career in sales and married Yolanda, his bride of over 60 years. They started a family, had two sons, and are proud grandparents and great-grandparents. He retired in 1984.

Schimmel vividly and tirelessly relates his account of Pearl Harbor whenever he can so that he can preserve the history he lived through for posterity.

In an interview posted on the U.S. Army website, Schimmel addressed the younger generation who may not know much about the history of WWII and even less about Pearl Harbor—the battle that plunged America into WWII, claiming thousands of American lives.

“Remember Pearl Harbor. What happened there can happen anytime.”