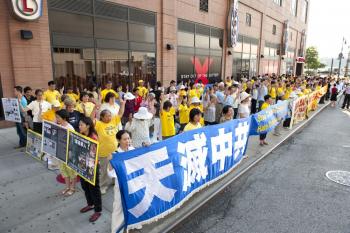 Practitioners hold a rally outside of the Chinese consulate in Manhattan on July 20, the ten-year commemoration of the State-sponsored persecution that has killed thousands. (Edward Dai/The Epoch Times)
US

A Peaceful Force at the Chinese Consulate

NEW YORK—Ten years ago, the head of the Chinese communist party said it would “eradicate Falun Gong in three months.” After 10 years of trying to "defame their reputations, bankrupt them financially, and destroy them physically,” not only has the communist regime, with its propaganda machine and military might, not eradicated Falun Gong, but the spiritual group has gained global recognition through its efforts to raise public awareness of the persecution.

July 20 is the ten-year commemoration of the day that millions of Falun Gong practitioners in China first came under fire. To mark this date, practitioners all over the globe came out to protest the persecution and mourn those who have died resisting it. In New York, practitioners gathered in front of the Chinese Consulate in Manhattan Monday evening in a show of peaceful resistance. But no longer do practitioners ask the leaders of the Chinese regime to change its ways.

'We Ask For Nothing'

“Many practitioners remember the last 10 years of gathering in front of the Chinese consulate,” said Gao Dawei, head of the Quit CCP Global Service Center. “These 10 years of peaceful appeal came in three parts. In the first few years we appealed to [then-head of state] Jiang Zemin to adopt a correct understanding of Falun Gong and stop the persecution. In 2004 we began exposing the crimes of the CCP, the methods they employ to torture practitioners. Now we are advocating for people to draw a line from the Party.” His organization is responsible for fielding public resignations from the Chinese Communist Party (CCP). Since December 2004, over 57 million people have publicly announced their resignation from the CCP and affiliated organizations.

“We ask for nothing,” Gao said. “We only expose the actions, nature, and crimes of the CCP. In these 10 years, we have persisted under the persecution. Practitioners in mainland China risk their lives to tell the truth and to lead people to awaken [to the truth of the persecution].”

Throughout this decade, Falun Gong practitioners used this and other peaceful and legal means to help stop the persecution of their counterparts in China. Resolutions condemning the persecution are making their way through legislative bodies across the United States. So far, governments from all over the world have passed 302 resolutions and issued 2,552 letters of support, according to Liu Guohua, a former law teacher at China Northeastern University. Over 30 countries have taken legal action against Jiang Zemin for 300-plus crimes.

Since the beginning of the persecution, the Chinese regime has employed state-run media to slander the practice, its members, and its founder. Torture methods continue to be used against practitioners young and old who are actively participating in Falun Gong exercises, study, or speak out against the brutality. Among the methods used against practitioners in prisons and labor camps are water torture, sleep deprivation, force-feeding, electric batons, beatings, rape, brainwashing, weeks in contorted positions, and injections of psychiatric drugs. Two-thirds of all the cases submitted to the United Nations special rapporteur on torture are of Falun Gong practitioners.

Falun Gong practitioner Xudong hails from Liaoning Province in the Chinese Northeast, where the persecution is most intense. He escaped to the United States via Thailand last year. Prior to that, his life in the Chinese regime's prisons had been grueling.

In 2001 he was sent to a labor camp, where he and many other practitioners were forced to undergo cruel treatment. “We were not allowed to sleep and spent many hours training under the beating sun,” Xu said. He and the others, under the surveillance of guards, were made to sustain a position in which one leg was raised. If they broke from the position, they were flogged. The world of the labor camp is closed off from the world, and prisoners are closed off from one another. “The windows were news-papered, and the guards turned the TV in the hallway up to cover the screams of practitioners being tortured.”

What happens in the labor camps comes to light through the recollection of survivors, but there are concentration camps deep within China from which no practitioners have emerged, once they are brought in. In these places, healthy people are gutted for their organs, which the Chinese regime then sells on the black market—and unwitting patients from all over the world flock to buy.

Dr. Damon Noto represents Doctors Against Forced Organ Harvesting. He says there is indisputable proof that the CCP draws from a large pool of captive practitioners to provide these organs. “In the early 2000s, China started to say that organ transplants there are not only cheap, but they're faster than in the U.S. The U.S. has had the best organ transplant system for 20 years, and the fastest you can get a kidney here is 9 months to a year.”

These and the findings of independent investigators have sent shock waves through the human rights community. The U.N. Committee against Torture called on China last fall to investigate the claims. Standing with banners in hand across from the Chinese consulate, practitioners issued a stern warning to the Chinese regime: “These crimes will be judged by history, no matter where you hide,” said Liu.