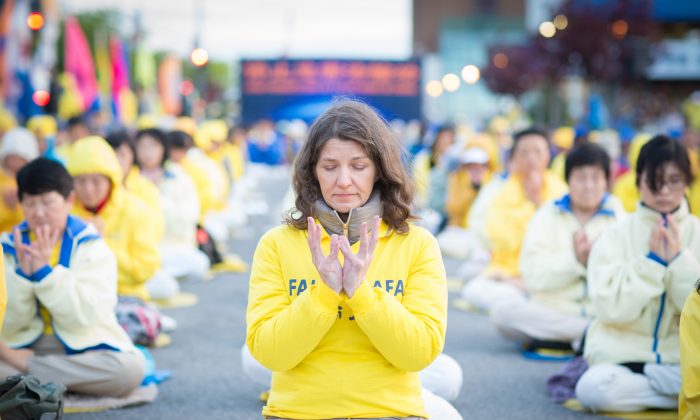 Hundreds of Falun Gong practitioners hold a vigil near the Chinese Consulate in New York for World Falun Dafa Day on May 11, 2017. 25 years ago, on May 13, 1992, Master Li Hongzhi started to teach the practice in China. The Chinese regime started to persecute practitioners on July 20, 1999. (Benjamin Chasteen/The Epoch Times)
New York

Hundreds Gather to Show Compassion to Their Persecutors

NEW YORK—Dressed in bright yellow shirts and jackets, they came in hundreds from around the world on the evenings of May 11 and 12 to stand in neat rows opposite the Chinese Consulate and perform slow-moving exercises, a form of both celebration and protest.

They are practitioners of Falun Gong, also known as Falun Dafa, and they gathered to celebrate the date 25 years ago—on May 13, 1992—that Mr. Li Hongzhi first publicly taught the traditional Chinese spiritual discipline.

They chose to perform their practice’s five meditative exercises across from the Chinese Consulate to call attention to the Chinese regime’s ongoing persecution of the discipline and to reach out to those working in the Consulate.

In the 1990s Falun Gong spread rapidly by word of mouth in China, with practitioners praising the physical, moral, and spiritual improvement they enjoyed.  By 1999 the regime estimated 70 million Chinese had taken up the practice. Falun Gong sources say the number was over 100 million.

In any case, more people were practicing Falun Gong than were members of the ruling Chinese Communist Party, and on July 20, 1999 the regime began a campaign to eradicate the practice.

Yang Jingfang, a native of Anhui Province in eastern China, witnessed the beginning of that campaign.

Concerned by a round-the-clock propaganda effort defaming the practice, Yang felt the need to speak out and uphold her beliefs. On Dec. 28, 2000, she went with a fellow practitioner to Beijing to appeal on behalf of Falun Gong.

Communist authorities imprisoned and tortured her, attempting to coerce her into signing a guarantee to renounce her beliefs. At one point during her imprisonment, she was handcuffed to a chair continuously for 32 days and nights. Her jailers also severely limited her food and water intake and deprived her of sleep.

But Yang refused to yield. “Force cannot change the human spirit. Even after being handcuffed for 32 days, I still refused to sign anything for them,” she said.

“This is not because I am strong or great,” she adds, but because Falun Dafa is “so sacred, so precious, and so magnificent.”

Yang is not alone refusing to bow to violence. The website Minghui, which serves as a clearinghouse for first-person reports on the persecution of Falun Gong, estimates that tens of millions of Falun Gong adherents in China are still practicing.

A recent Freedom House report says the survival of Falun Gong in China is a “striking failure of the CCP’s security apparatus.” Freedom House says that across China practitioners have responded to suppression, just as Yang did, “with a variety of non-violent tactics,” tactics that “a growing number of non-Falun Gong practitioners” in China have joined.

Since the mid-1990s, Falun Gong has spread from China to over a hundred countries, and the practitioners outside China have supported those inside China. Just as with the vigils held opposite the Consulate, practitioners have used non-violent means to raise awareness of the atrocities taking place in China.

Maurice Forgeng, an electrician who came from Germany to attend the World Falun Gong Day events, began practicing at the end of 2010. He was captivated by the central tenets of Falun Gong–truthfulness, compassion, and tolerance.

“It’s always a challenge to look within and not to look on the outside,” he said, when conflicts or tensions arise. But he has learned how to cultivate himself—Falun Gong is part of a tradition of cultivation practices in China, practices that teach individuals how to purify their bodies and elevate their morality. Forgeng said he now can improve upon his shortcomings rather than blame others or external factors.

Matthew Kang, a Korean native but long-time resident in the San Francisco Bay Area, gushed about how Falun Gong made him a better person.

The practice offered him a path for self-improvement, helping him, for instance, in calming his irritable temper. “I could change myself with this, conforming to the principles of truthfulness, compassion, and tolerance. That was my motivation in learning [Falun Gong],” he said.

In their peaceful demonstration outside the Chinese consulate, these Falun Gong practitioners seek to tell the world about the egregious human rights abuses of the CCP.

According to the Falun Dafa Information Center, millions of practitioners have been subject to wrongful imprisonment, brainwashing, and torture. Over 4,000 deaths due to abuse and torture have been confirmed, but due to the difficulty in getting information out of China, the number is believed to be far higher.

The June 2016 report “Bloody Harvest/the Slaughter: An Update” estimates that China has been conducting between 60,000 and 100,000 transplants each year since 2000, with most of the organs coming from Falun Gong practitioners. The victims of forced organ harvesting are killed by the procedure.

Yang said that in demonstrating outside the Chinese consulate, the practitioners want to reach out to the Chinese people working there. To be compassionate, she said, is to show kindness even towards the persecutors. Many of them are also “innocents that have been manipulated by this persecution…They are the most pitiful,” she said, because they have been misled by Chinese communist propaganda and slander against Falun Gong.

“Even though they persecute us like that, [Falun] Dafa practitioners still go to tell them the truth [about Falun Dafa],” Yang notes.

Yang, now a retiree living in Philadelphia, spends much of her time at the Liberty Bell Center, a popular site for Chinese tourists. With other Falun Gong practitioners, she hands out materials every day to tourists about Falun Gong and seeks to shed light on the abuses of the CCP.