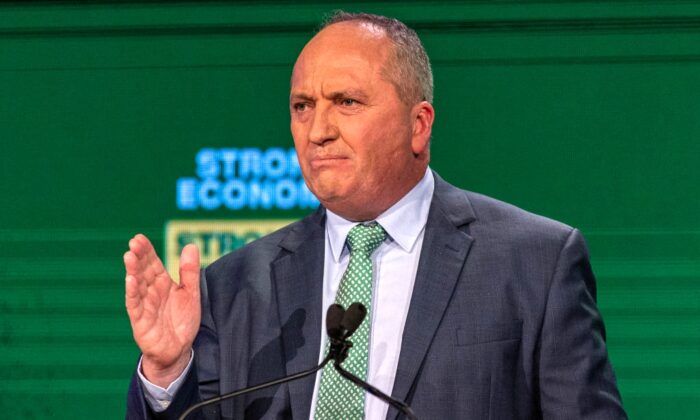 Outgoing Nationals leader Barnaby Joyce has warned that asking Australians to switch from jobs in the mining sector for positions in the renewable energy sector will not be that simple because, financially, the transition may not stack up.

Joyce, who lost the leadership of the regional party to David Littleproud on May 30, also called for Australians to embrace nuclear power if they wanted to shift to lower emission energy sources.

His comments come as the new Nationals leader said the party would stick by its commitment for Australia to reach net-zero by 2050, prefacing this by saying reducing emissions would be achieved through advances in “clean” energy technology (like hydrogen) and not through carbon taxation.

Joyce said clean energy advocates needed to show Australians what jobs would be available to them in renewable energy, not just a “promise.”

“Show them they are getting the same amount of pay [and] conditions,” he told reporters on May 31.

Joyce said Australians could not be “kicked out onto the street” and then later promised work.

A common argument prosecuted by renewable energy advocates is that governments can develop brand new clean energy industries and job opportunities and economic growth in the pursuit of net-zero.

The Clean Energy Exports Jobs report published by consultancy Accenture last year claimed that Australia could add 395,000 jobs and $89 billion (US$66.9 billion) of economic activity by 2040 if the country pursued net-zero by 2050.

However, the Institute of Public Affairs has warned that many of these slated jobs were actually part-time or low-paying positions.

“The Accenture report gives away the ruse when it says that ‘clean exports include industries that employ more people per dollar of revenue than the current fossil fuel industry’—the translation for laypersons: clean export industries create less value than the fossil fuel industry per worker, and as such are likely to pay lower wages to their workers,” Cian Hussey previously wrote in The Epoch Times.

Joyce echoed the same sentiment saying “pay rates” are often omitted from discussions about the transition to renewables.

“What they don’t mention is the payroll. Some [people] are probably on $46 to 56 an hour working in a mine, and in the renewable [sector] for basic manual work, probably $26 an hour,” he said. “Not many families are going to say, ‘Look, I’m really happy if you half your wage.'”

“So NDIS, or maybe pensions, or maybe schools?” he said. “There’s got to be a move away from the slightly naïve idea that if you shut down your major exports, you somehow keep the same standard of living.”

Joyce said it was time for Australia to open up to the development of nuclear energy in the country so that “we’re not only exporting uranium but actually exploiting the technology to go with it.”