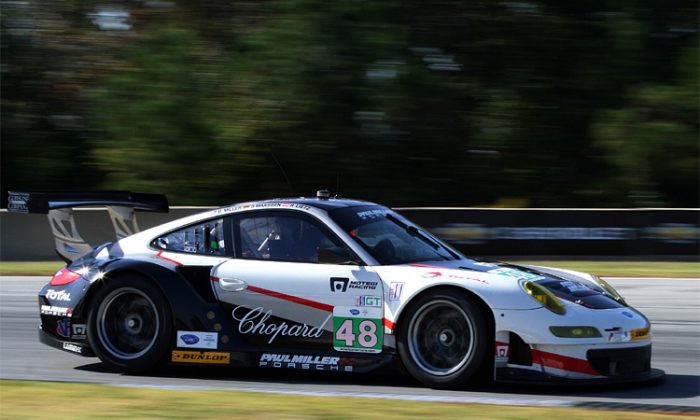 Holzer finished second in the 2012 International GT series with five wins and four podiums. His permanent addition to the Paul Miller team gives the team a big boost for the upcoming season. The 24-year-old German also drove a few races for Flying Lizard in the ALMS in 2012, earning one pole position.

“I’ve been watching Marco since he and Bryce drove together in the 2009 season, once at Daytona and once at the Spa 24 hours, where they finished second,” said team owner Paul Miller in a press statement. “He’s progressed nicely through the years and did a great job in the #44 Flying Lizard Porsche last year in the ALMS. It will be valuable to have his track knowledge along with Bryce’s. I expect he and Bryce will be a strong team, fast and reliable.”

Along with signing Holzer, the team switched to Michelin tires for 2013, a move which should also increase the speed of the team’s #48 Porsche.

“I am excited to join Paul Miller Racing for the 2013 American Le Mans Series GT championship,” Holzer said. “Their Porsche 911 GT3 RSR was improving through the season last year, and the addition of Michelin tires should help us be even more competitive. Bryce is really familiar with most of the circuits, and I have a lot of experience setting up the RSR with Michelin tires, so we should make a good team.”

Team owner Paul Miller’s son Bryce, 30, will return for his third season behind the wheel of the team’s Porsche. 2012 was one of his most successful seasons, with three top-five finishes.

“I am very excited to have Marco join our program,” said Bryce. “He has risen to the top quickly and his maturity as a driver has shown every bit as good as his speed. I’m really looking forward to working with him again.”

The 2013 American Le Mans Series season starts on march 26 with the 61st Twelve Hours of Sebring. Tickets are available through ALMS.com.