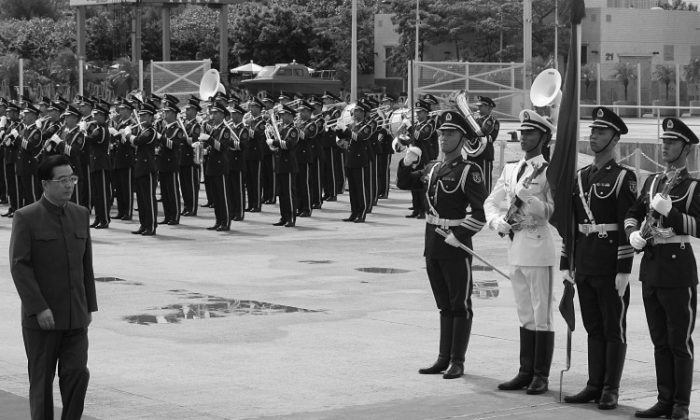 Hu Jintao inspects the People's Liberation Army Garrison during a visit to the Stonecutters Naval Base in Hong Kong June 2007. Hu recently made a series of personnel changes that increase his power over the Chinese military. (Mike Clarke/AFP/Getty Images)
China

Hu Jintao, the head of the Chinese Communist Party, has slotted a handful of loyalists into key military posts, marking what the Chinese regime’s mouthpiece Global Times called the largest personnel reshuffle in the People Liberation Army (PLA) in a decade.

The shift is a decisive move by Hu to maintain influence over the armed forces after he steps down as head of the Communist Party at the 18th Party Congress to be held in early November, and is a blow to the rival faction headed by Jiang Zemin, according to analysts of the Party.

Other new appointees include two vice chiefs of the GSD and two vice directors of the GPD.

The new appointees are basically all incumbent Party leader Hu Jintao’s protégés, according to political analysts. Most of them were promoted three times by Hu since he rose to paramount leader in 2002.

When new commander of the Air Force, Ma Xiaotian, was deputy chief of staff of the PLA, there was a standoff between China and the Philippines over the disputed islands of Scarborough Shoal in South China Sea. Ma said during an interview with the Hong Kong-based Phoenix TV that China was not prepared to use military force in the South China Sea, the Oriental Morning Post reported on May 29.

Ma’s remarks echoed Hu’s speech at the fourth round of the China-U.S. Strategic and Economic Dialogue on May 4, during which Hu said he hoped that China and the United States could explore ways to build the China-U.S. cooperative partnership.

The new head of the GPD, Zhang Yang, is one of the top military leaders who pledged loyalty to chairman Hu after the Bo Xilai scandal broke out earlier this year. In an article he wrote for People’s Daily on June 5, he emphasized that the army must follow Hu Jintao’s order of “steadfastly obeying the guidance of the Party.”

Two Generals, Liu Yuan and Zhang Haiyang, who both had ties with Bo Xilai and were previously considered candidates for top posts, were not included in the new line-up.

Wang Lijun, former police chief of Chongqing whose failed attempted defection to the U.S. Consulate in February led to the dramatic downfall of Bo Xilai, has given the Central Discipline Inspection Committee information regarding Bo, Liu Yuan, Zhang Haiyang, and other army officials who were plotting a coup against the presumptive next party head Xi Jinping, according a report by Hong Kong’s Open Magazine in May.

The report also said that Bo’s father Bo Yibo was Liu Shaoqi’s trusted aide, and the two families therefore have a close relationship. Bo promised to make Liu the chairman of CMC once he successfully usurped Xi’s power, the report added.

Several high-ranking military officials who are Bo’s allies have reached retirement age and will retire after the 18th Party Congress. Among them are Guo Boxiong and Xu Caihou, who are both vice chairmen of the CMC, as well as Defense Minister Liang Guanglie.

Changes in Military and Political Landscape

Hu Jintao is now in full control of the military, and he will gain an even stronger foothold if he can appoint his loyalists as the vice chairmen of the CMC, according to dissident Song Yuxuan, who oversees China Affairs Research Center in the U.S.-based China Social Democratic Party, in an interview with The Epoch Times.

“Liu Yuan and Zhang Haiyang have all been implicated by Bo Xilai, and now the faction led by Bo’s strong ally, former Party head Jiang Zemin, doesn’t have any other candidates to compete for top military posts,” Song said, adding, “The faction has been dismantled in this reshuffle.”

Most of these new appointees will become members of the CMC, which will be very different from the current CMC, according to New Tang Dynasty Television’s political commentator Wen Zhao.

Jiang Zemin’s direct influence in the army will be phased out afterwards, and judging from the recent personnel changes in organizations under the Central Committee, including the United Front Department and General Office of the CCP, the overall political landscape in China has also shifted, and Jiang’s faction has lost ground, Wen added.

Shi Zangshan, a Washington, D.C.-based expert on Chinese politics, told The Epoch Times that the fact that prominent princeling Liu Yuan didn’t get a promotion during this round of military reshuffle is a sign that Bo Xilai will receive a harsh sentence in the upcoming trial against him.