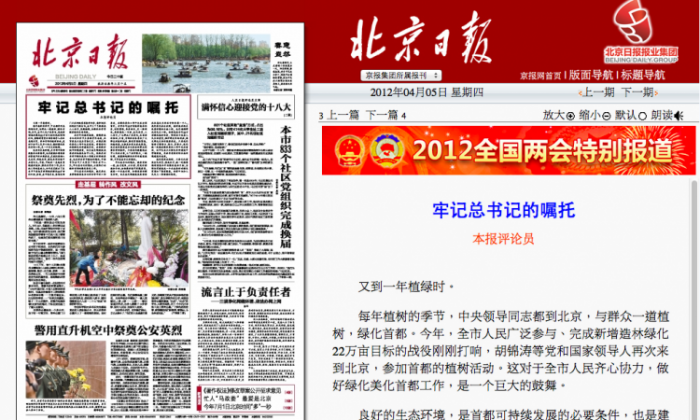 An article was printed in Beijing Daily on April 5 calling for all cadres to “Keep firmly in mind the general secretary’s earnest instructions." The article was an attempt to atone the for insubordinate previous editorial which undermined Hu Jintao amidst the Bo Xilai political crisis. (Beijing Daily)
China

The top political commissar at the Beijing Daily, the official mouthpiece of the Communist Party committee in the city, was demoted recently, according to an official announcement. A source familiar with the circumstances said it was due to his role in the Daily’s lending support to ousted cadre Bo Xilai and making veiled criticisms of paramount leader Hu Jintao.

The announcement named another 100 officials at Beijing Daily and in the Beijing city administration who were also sacked, demoted, or promoted. The announcement came out toward the end of the meeting by top Chinese Communist Party (CCP) leaders at the seaside city of Beidaihe recently, according to the source. Important personnel changes usually follow such meetings. The news was released on Aug. 15, two days before the meetings concluded.

Party leaders meet in the city every summer for the final round of major horse trading ahead of the 18th National Party Congress, where a once-in-a-decade leadership change takes place at the Politburo and the Politburo Standing Committee, the highest ruling body in the country.

Mei Ninghua, went from secretary of the Party leadership group (dangzu) at the Beijing Daily, to vice secretary. According to a source familiar with the situation, the decision was made in large part due to Beijing Daily’s publishing of a report in late March that claimed the CCP’s “the general secretary should not be the highest authority over the Party’s Central Committee.”

Whether Mei was directly behind the articles is unclear, but as Party secretary he is responsible for political discipline at the publication.

That article said instead that “collective leadership should be emphasized,” which was interpreted as a slight against Hu Jintao during the initial stages of a power struggle that pitted a faction led by former CCP leader Jiang Zemin and his cohorts and another faction headed by Hu Jintao and Premier Wen Jiabao.

News of this split in the Party came to light after Bo Xilai’s second-in-command Wang Lijun attempted to seek asylum in a U.S. Embassy in February. In April Bo was ousted as CCP leader of the city of Chongqing.

At the time of the Beijing Daily report’s publication, Hu Jintao was in Cambodia and when he returned four days later, it was deleted from the website. An editorial, which said, “Keep firmly in mind the general secretary’s earnest instructions,” was run instead.

In May, search terms related to the Beijing Daily were blocked on Weibo several times after it lead a propaganda campaign against the U.S. aid of blind Chinese activist Chen Guangcheng, who later defected. Chinese Internet users slammed the newspaper via social media sites, and censors pulled the term.

At the time, the China Media Project said the paper could be one of the focal points regarding the infighting among high-level CCP officials. “We could be witnessing the low-level competition of factional propaganda and media control,” it said.