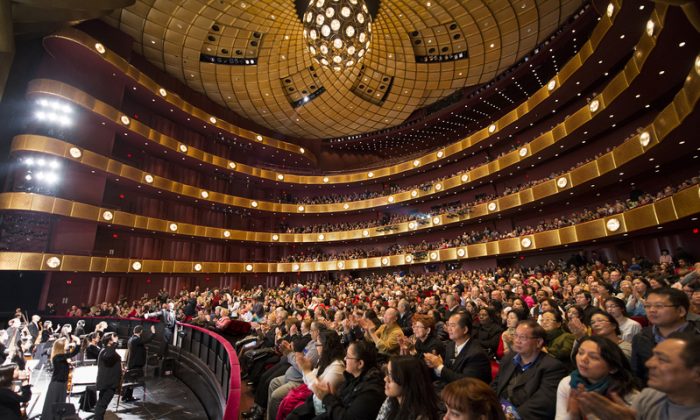 NEW YORK—Shen Yun Performing Arts is nearing the end of its run in New York City, with its last performance of the year set for Sunday at Lincoln Center’s David H. Koch Theater

Michael Ades, a partner at RD Management LLC, one of the nation’s largest real estate development organizations with tenants such as Wal-Mart and Target, attended Shen Yun Saturday afternoon with his wife and children. He said: “We loved it, we were enthralled by the performance, we loved the music, the dance, the colors, the background, the costumes—everything about it was super.”

His young daughter said she liked it when the dragon flew out of the ocean in the dance Ne Zha Churns the Sea. Many audience members say Shen Yun is excellent for all ages.

The New York-based company travels the world reviving ancient Chinese culture through story-based dances. It features a unique digital backdrop that displays the multifaceted geography of China’s vast expanse. The audience travels from the courts of various dynasties, each with their unique characteristics, to the folk celebrations and traditional gatherings of some of the country’s over 50 diverse ethnic groups.

Mr. Ades described how he felt after the performance: “Fulfilled. You feel kind of light on your feet. It’s just very pure—pure dance and music, it’s wonderful.”

His wife, Lisa Ades, said she loved the music and the costumes. She mentioned the long, flowing silk sleeves, known as water sleeves, featured in the dance Delicate Beauty of the Han.

“I loved that dance,” she said. Her husband agreed, adding, “I love when they take the silks and move in circles and the way they integrate it into the entire dance, it’s beautiful.”

He also enjoyed the use of other props in the dancing—such as when the Tang imperial drummers sounded victory, beating a rhythm as they danced; or when the Mongolian drinking party seemed to spontaneously dance in merriment mid-feast, creating a crisp, invigorating beat with chopsticks.

“The costumes, the lightness of them, and the tumbling,” said Mrs. Ades, adding that the classical Chinese dance is a form unlike anything she has seen before. She was happy to learn about it and experience it.

Shen Yun’s website explains: “Classical Chinese dance has a long history of thousands of years, passed down continuously within the imperial palace and ancient Chinese theater and opera. Soaking up profound wisdom from every era and dynasty, it has become a complete system of dance embodying traditional aesthetic principles.”

It’s bearing and form contain deep inner meaning and it also includes highly difficult techniques, including jumping, leaping, turning, and flipping. Shen Yun’s dancers truly embody ancient Chinese culture, taking seriously the improvement of mind and heart along with physical capabilities. In Chinese dance, the dancer’s inner realm is displayed on stage, so it must be beautiful along with the outward form.