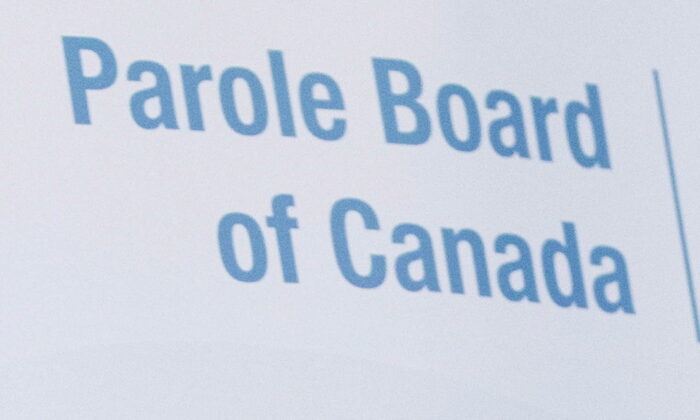 Parole Board of Canada sign shows in Bath, Ont., on Oct. 17, 2018. (The Canadian Press/Lars Hagberg)
Canada

FREDERICTON—An American who has spent nearly 35 years in prison for the murder of a New Brunswick police officer was denied full parole on Wednesday.

Anthony Romeo, 58, is serving a life sentence in a New Brunswick prison for the shooting of highway patrol Const. Emmanuel Aucoin during a traffic stop in March 1987, southwest of Fredericton. Romeo became eligible for full parole in 2012, but the Parole Board of Canada said at the time he posed a risk to the public.

During a parole hearing Wednesday, the board was told that if released, Romeo would be deported to his native United States, where he would be a free man and not subject to parole or other kinds of supervision.

A parole officer told the hearing that while Romeo has been taking his medication for paranoid schizophrenia and making use of other treatment and support programs, the Correctional Service of Canada recommended against his release.

During his trial in 1988, a psychiatrist testified that Romeo thought he was being followed by a monster who brutally killed young men, adding that the killer thought the 31-year-old constable was that monster.

The March 1987 traffic stop was the third time Romeo had been stopped by police for speeding in his sports car in Quebec and New Brunswick. He had fled the United States, where he was wanted for murder in New York state.

On Wednesday, Romeo told the board he was abusing alcohol and drugs at the time of Aucoin’s murder. “I was very drunk and high at the time. I think that led to mental health issues.”

Because of COVID-19 restrictions, the hearing was held virtually by video link. Romeo could be seen calmly sitting at a table in a room at Dorchester Penitentiary in New Brunswick.

Romeo told the board he has the support of his doctor and a number of relatives, including his parents who are in their 80s. He said he planned to use that support network and that he had no intention of ever touching alcohol or drugs again.

Romeo had also been an avid gun collector, using the weapons for hunting and target shooting, but he said he would not own another gun, even for protection.

He said he was sorry for his actions and believed that prison had allowed him to turn his life around. “I’m on medication, I’m off drugs and I don’t have a violent problem or anger problem anymore.”

Two members of the parole board asked questions about how they could be assured Romeo would take his medications and stay off drugs and alcohol without having a parole officer or other structured supervision in the U.S.

Given a chance to speak at the end of the hearing, Romeo apologized to the Aucoin family, and he expressed his concern that he would be denied parole because there was no arrangement for parole to be offered upon his potential return to the United States.

“I feel that it is unfair where being an American in Canada and with the accountability back home and not being on parole, I wish there was a way I could be on parole in New York because we wouldn’t have this problem,” he said. “Maybe if the board denies my parole, my case team could find a way to put me on parole in New York and maybe a transfer to a prison in New York.”

After a short deliberation, the board denied parole and said it felt Romeo would still pose an undue risk to society if released.