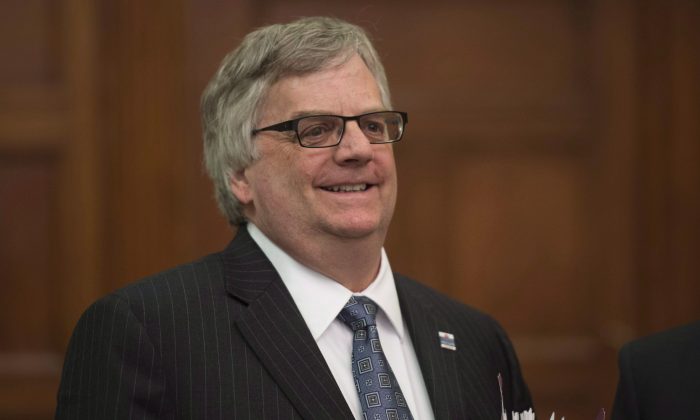 OTTAWA—National Defence and Parliament’s budget watchdog have been quietly battling over access to key information about the government’s multi-billion-dollar plan to buy the navy new warships.

The department says it remains committed to openness and transparency, but the information requested by parliamentary budget officer Jean-Denis Frechette is “very sensitive” and outside his mandate.

Frechette, however, alleges there is a culture of secrecy within National Defence, and that the department remains among the worst when it comes to transparency.

“There is a certain culture whereby this information suddenly becomes confidential or cabinet confidence.”

The dispute is reminiscent of similar disagreements between National Defence and Frechette’s predecessor, Kevin Page, particularly when it came to the F-35 stealth fighter.

This time, the disagreement started in September when Frechette wrote two letters to National Defence’s top bureaucrat, John Forster, asking for documents explaining the type of equipment and capabilities the navy requires in its new warships.

The purpose was to come up with a cost estimate for the project, which has been billed as the single largest military procurement in Canadian history and forms the backbone of the federal government’s national shipbuilding strategy.

Frechette alleges there is a culture of secrecy within National Defence, and that the department remains among the worst when it comes to transparency.

Previous estimates have put the budget for the entire project at between $26 billion and $40 billion for 15 ships, though the Liberal government has since said it will not discuss cost or how many ships it plans to buy until more information is available.

National Defence replied two weeks later saying the information requested was “very sensitive” because a competition was underway to choose a new design to replace the navy’s 12 frigates and three recently retired destroyers.

The response added that the information might be released once the competition is over and a new design is chosen, likely in the summer.

Frechette sent a separate letter to Finance Canada asking how much money had been set aside in the government’s long-term plans for the warships, but the department says the data is confidential.

National Defence spokesman Dan Le Bouthillier said in an email that the department works with the parliamentary budget office to help it analyze government programs that are “consistent with its mandate.”

“However, on occasion, restrictions intended to protect national security or commercially sensitive information may prevent National Defence from providing some information to the PBO,” he added.

“DND will continue to be a strong steward of the tenets of openness and transparency.”

But Frechette told The Canadian Press after testifying to the Senate committee that he didn’t accept the National Defence’s reason for withholding the information.

The warships aren’t the only multi-billion-dollar defence procurement that Frechette and his staff are examining, as the parliamentary budget officer is also digging into the Liberal government’s plans to buy Super Hornet fighter jets.

The parliamentary budget office has previously struggled to get information from National Defence to conduct cost estimates, though that hasn’t stopped it from producing reports, particularly on large procurement programs.

The most famous was a report in March 2011 that pegged the cost of 65 F-35 fighter jets at $30 billion over 30 years, as opposed to the $16 billion cited by the Conservative government at the time.

The Liberals promised during last year’s election campaign to provide more power and independence to the budget officer, and indicated last month that they would introduce legislation to expand its powers and scope of responsibility.

“Our government is committed to openness and transparency, and we remain committed to working with the parliamentary budget officer to ensure his office has the information needed to fulfil its mandate,” Jordan Owens, a spokeswoman for Defence Minister Harjit Sajjan, said in an email.

Frechette said he welcomed such legislation, though he has not heard anything from the government about when it intends to move on the promise or what form it will take.