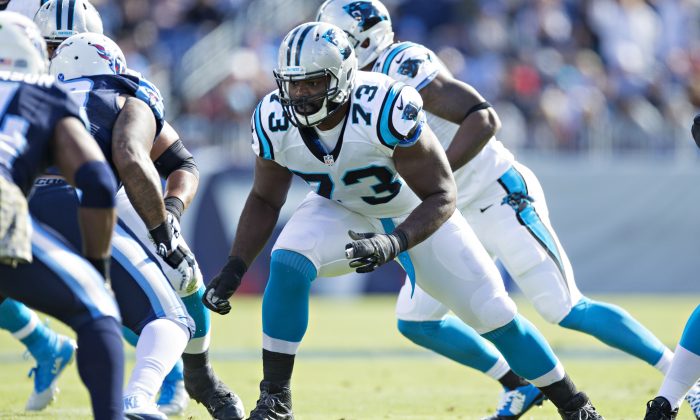 Panthers left tackle Michael Oher, the real-life inspiration behind the movie “The Blind Side,” posted to Facebook a picture with his adoptive parents Leigh Anne and Sean Tuohy on the field at Bank of America Stadium after Carolina’s dominating 49–15 win over Arizona in the NFC Championship game on Jan. 25.

Man what a time!

Surprisingly, Oher is not a fan of the successful 2009 movie, which starred Sandra Bullock in her Oscar-winning role as Leigh Anne Tuohy who helps adopt the then-teenager Oher. But it doesn’t seem to be because of the movie critic in him—rather it’s the expectations that have come with it.

“People look at me, and they take things away from me because of a movie,” he told ESPN in June. “They don’t really see the skills and the kind of player I am. That’s why I get downgraded so much, because of something off the field.”

In the movie the Tuohys—a well-to-do Memphis family—take in the homeless high-schooler, but football-talented, Oher for what starts out as a night and turns into an extended stay as the couple becomes his legal guardians. Soon they hire a tutor, Miss Sue (Kathy Bates), to help him get his grades up so he can go to a major university. The now academically-qualified 6-foot-4-inch Oher is suddenly a major prospect and eventually chooses Ole Miss over Tennessee—much to the excitement of Ole Miss fans Miss Sue and Leigh Anne.

Oher goes on to star at Ole Miss before becoming a first-round pick of the Baltimore Ravens.

Now seven years into his career, Oher already has a Super Bowl ring from his five-year stint with the Ravens before moving on to Tennessee in 2014 and then Carolina this year. In all the seven-year veteran has started all 107 games he’s played while playing both tackle positions.

Oher says the Carolina players like to pick on Oher about the Oscar-nominated movie—which actually doesn’t bother him. Oher says it helped put him at ease with his new teammates.