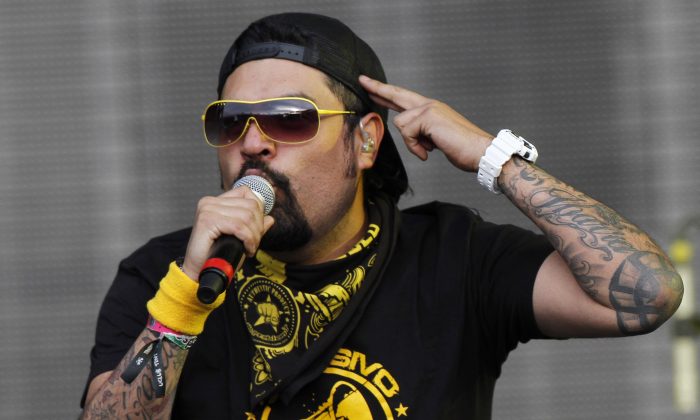 In this March 17, 2013 file photo, Luis Ramon Ibarra, lead vocalist for the Mexican band Panteon Rococo, performs at the Vive Latino music festival in Mexico City. Mexico's Interjet airline said Wednesday May 28, 2014, it regrets an incident in which members of a Mexican rock band were told they couldn't board a plane until they covered up their arms, which bore tattoos. (AP Photo/Marco Ugarte,File)
Entertainment

Panteon Rococo wasn’t allowed to get on a plane until they covered up their arms, which have tattoes.

Now Interjet airline says that it regrets what happened.

It said that it “regrets the bother and inconvenience” that the band suffered when its members tried to board a flight in Ciudad Juarez.

The company said an investigation has been launched.

The band said on its website that at least two members–singer Luis Ibarra and trombonist Francisco Gonzalez–were told they couldn’t board the flight without covering up their arms.

Police were called after the members refused.

They were eventually allowed to board after a heated discussion with ticket agents.

The band called the situation “shameful.”

The airline said that the “regrettable mistake” doesn’t represent the company and that it does not discriminate or “economic, physical, cultural, social or any other reasons.”