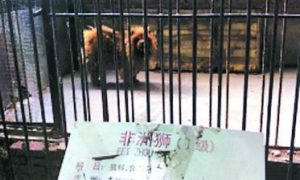 A Barking Lion in a Zoo? Only in China
0
Share Now
TelegramFacebookTweetEmailTellMeWeReddit
Copy Link
China

Panda in Zhengzhou Zoo May Have Died From Neglect

The sudden death of a giant panda in a central China zoo has triggered concern from media and netizens that maltreatment contributed to the animal’s demise.

Jin Yi, a 7-year-old female, died at the Zhengzhou Zoo in Henan Province from stomach bleeding on Feb. 9. Her death was announced on Feb. 13, but a zoo staffer claimed to local media on Feb. 10 that she had been sent back to Sichuan Province to breed, after visitors asked where she was, according to Sina News.

The Sina reporter went to the zoo following the announcement, and said the smell of the enclosure was really strong before even entering the area. People there were all holding their noses, and the surviving panda was eating bamboo from the floor where manure was mixed in.

The Dahe Daily reported a visitor as saying, “Every time I saw the floor of the panda display area filled with manure, I wondered how the pandas could be healthy in such an environment?”

A keeper who cared for the panda told the Daily that Jin Yi had lost over three stone during the seven months before her death.

A Weibo blogger commented: “I used to think that pandas are the luckiest animals on Earth, but I don’t think that now I know what happened to panda Jin Yi. Pandas can get heat stroke at 23° Celsius (73° Fahrenheit), but when it was 30° Celsius (86° Fahrenheit) in Zhengzhou, Jin Yi had to stay outside in the sun so visitors could have their photos taken with her. If Jin Yi didn’t cooperate, she was beaten. After three years of ill treatment in Zhengzhou Zoo, poor Jin Yi died away from her birthplace. She will no longer be bothered by anyone. Jin Yi, rest in peace.”

The giant panda is endangered, with about 300 bears kept in captivity, and wild populations estimated at around 1,600.