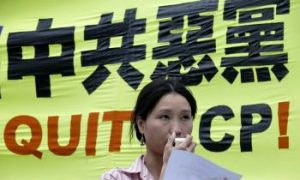 Stories of Helping People Quit the CCP
0
US

[xtypo_dropcap]A[/xtypo_dropcap] panda cow, named for its panda-like markings, was born on a farm in Larimer County in Northern Colorado.

Born on New Year’s Eve, the rare miniature male calf is thought to be one of only approximately 24 in the world, according to The Associated Press.

The calf, named Ben, was born from a Lowline Angus cow.

The calf, the product of selective breeding, has a white belt around its midsection, a white face, and black ovals around his eyes. Breeder Richard Gradwohl said he worked with eight different breeds of cattle over 44 years to produce the panda cow for Farmer Chris Jessen, according to the Loveland Reporter Herald.

Apart from miniature cattle, Jessen has miniature donkeys and a wallaby on his hobby farm. He said such panda calves could sell for $30,000, according to the AP.

You can view a photo of the panda cow HERE.