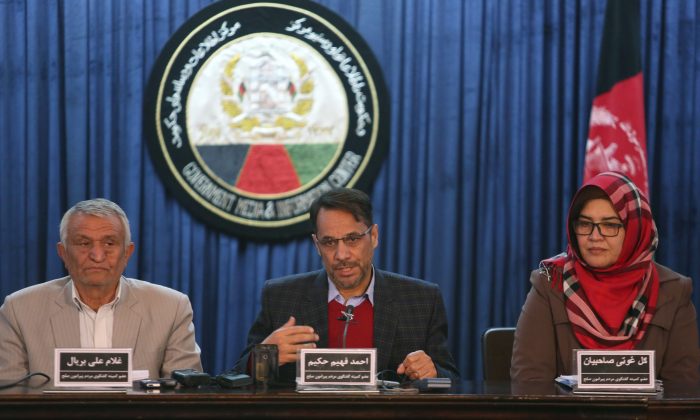 Ahmad Fahim Hakim (C), a member of the Afghan People's Dialogue on Peace Initiative, at a press conference in Kabul, Afghanistan, on Jan. 9, 2016. Afghanistan, Pakistan, China, and the United States will hold talks in Islamabad on Monday aimed at reviving the Afghan peace process. (AP Photo/Rahmat Gul)
Asia & Pacific

KABUL, Afghanistan—Afghanistan, Pakistan, China and the United States will hold talks in Islamabad on Monday aimed at reviving the Afghan peace process.

Afghan Foreign Ministry spokesman Ahmad Shekib Mostaghni said Saturday that the representatives will discuss a “roadmap for peace talks.” The talks were agreed upon during a visit to Kabul last month by Pakistan’s army chief Gen. Raheel Sharif.

Monday’s talks do not include the Taliban, who have been battling the U.S.-backed government for nearly 15 years and have recently stepped up their attacks.

Talks with the Taliban have been on hold since July, when they collapsed after just one meeting following Afghanistan’s announcement that longtime Taliban leader Mullah Mohammad Omar had been dead for more than two years. The Taliban called off its participation and a second meeting was cancelled.

A subsequent power struggle within the Taliban has raised questions about who would represent the insurgents if the talks with Kabul are revived.

Pakistan is believed to have influence over the Taliban, but relations with Kabul have been tense in recent months. The two countries have long accused each other of backing the Taliban and other insurgents operating along their porous border. Taliban leaders are widely believed to be based in Pakistani cities near the Afghan border, including Quetta and Peshawar.

Afghan President Ashraf Ghani took part in a regional “Heart of Asia” conference last month in Islamabad, which called for the resumption of the Afghan-Taliban peace negotiations. Ghani was given a warm welcome at the meeting, which was also attended by U.S. and Chinese representatives.

Analysts have cautioned that despite the rapprochement between Kabul and Islamabad, any substantive peace talks are still months off. Taliban demands have consistently focused on the end to an international military presence in the country. The U.S. and NATO have 13,000 troops stationed in Afghanistan, mostly in a training capacity, They include 9,800 Americans.

The Taliban have intensified attacks in recent weeks and come close to taking over strategically important districts in southern Helmand province, the world’s premier poppy-producing region. Almost all the world’s heroin is made from opium grown in southern Afghanistan.

Afghan civil society groups on Saturday called for an inclusive peace dialogue, saying that women’s and human rights should be central considerations. Few previous meetings between the two sides have included women or civil society activists.

Sonya Aslami, of the Afghan People’s Dialogue on Peace Initiative, said women’s participation in the peace process was essential to its success. “The government should consider it as a priority,” she said.

The umbrella group said five years of peace negotiations had failed “due to a lack of clear objectives, a lack of inclusivity in peace planning and insufficient consideration of people’s demands.”