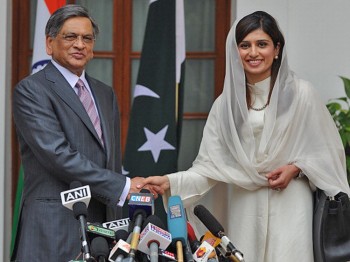 Pakistan and India to Ease Control of Trade and Travel

After a day of talks, Indian and Pakistani foreign ministers issued a joint statement saying that they were satisfied with their discussions on several longstanding issues and planned to meet again in the first half of next year.

The main issues discussed in Islamabad were confidence building measures (CBM), counterterrorism cooperation, and trade and travel across the Line of Control in the contested state of Jammu and Kashmir.

The ministers said that expert groups will continue CBM talks, including talks on nuclear issues, in September.

Although no details were revealed, they did say that progress had been made toward resolving tensions around the 2008 terror attacks, in Mumbai, in which Pakistani-based terrorists killed over 160 people.

The ministers did agree to expand the number of trade days across the Line of Control from two to four days, and agreed to make tourism and pilgrimage travel across the Line easier.

The legal ownership of the state of Jammu and Kashmir has been a point of contention between India and Pakistan since the late 1940s, with the countries fighting two wars over the issue.

At a joint press conference after the meeting, Pakistani Foreign Minister Hina Rabbani Khar said that she is hopeful that "This is indeed a new era of bilateral cooperation between the two countries. I wish to convey to the people of India, Pakistan’s desire to open a new chapter of amity and understanding between our two countries," according to the VOA.