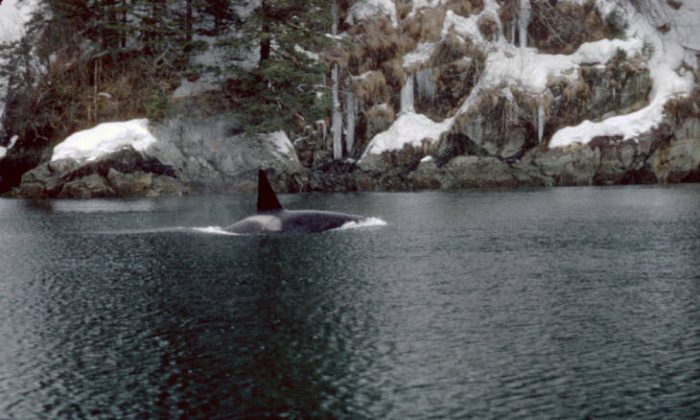 In this file photo, an orca is seen in Prince William Sound in Alaska. (U.S. Fish and Wildlife Service)
US News

The Pacific Northwest’s beloved killer whales are starving to death and failing to reproduce.

Part of the problem is the decline of the chinook salmon, the main source of food for these orca pods.

Responding to the plight of the orcas and the salmon, Washington’s Governor Jay Inslee issued an executive order in March that aims to recover these two species.

The order refers to the killer whale, also called orca, as an “iconic and treasured species” and notes that, since 1995, their numbers have dwindled from 98 to 76.

As the numbers have declined, the number of females that breed and the frequency of their breeding has declined. Scientists are concerned that as those that are now breeding grow older, there will not be enough young females to replace them.

Three problems have been identified as affecting the orca population: food supply, noise, and pollution.

The giant chinook salmon—known as the “king” salmon due to its size of 40 inches at maturity—are at only 10 percent of their historic numbers, according to the Environmental Protection Agency. The EPA attributes the decline to the pollution of Puget Sound.

With the salmon population drastically reduced, orcas have to work harder to either catch enough of them or find smaller fish to eat. In either case, the orcas are not getting enough to eat.

The giant whales coordinate their hunting through sounds they emit, but heavy freight traffic, plus the sounds from boats for whale watching, make the whales’ lives difficult. The governor’s office cites a study that reports the whales lose up to 97 percent of their ability to communicate due to noise pollution.

Suquamish Tribe Chairman Leonard Forsman said of the orcas, “They bless us with their presence and depend on us to keep our sacred pact with the Creator to care for this beautiful land.”