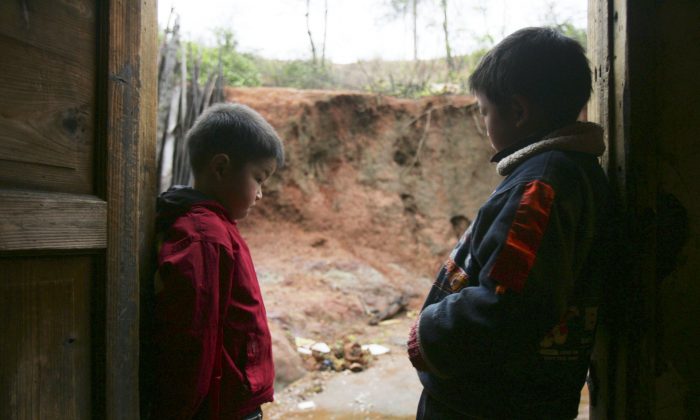 Two children confirmed to be suffering from lead poisoning, stand in their home March 16, 2007 in Chaxian County of Hunan Province, China. About 100 people from four villages, most of them children, were confirmed to be suffering from lead poisoning resulting from a nearby smelting plant that was closed down after running for 12 years. Most recently, over 300 children in Dapu Town, Hengdong County of Hunan Province show high levels of lead in their blood. The town’s mayor says they’ve been chewing on their pencils, it’s not from the chemical factory in town. (China Photos/Getty Images)
China

Over 300 Children Poisoned by Lead, Town’s Mayor Makes Light of It

More than 300 children in China’s Hunan Province have been diagnosed with lead poisoning, with chemical pollution from a factory being the suspected source. The town’s mayor blames the poisoning on children biting on their pencils while studying in school, which triggered an angry outcry from netizens.

The Meilun Chemical plant, which produces electrolytic zinc, gives off foul-smelling fumes. Dust and waste-water are not being treated effectively and are directly discharged into nearby Xiangjiang River, local people told Jinghua Times, a mainland Chinese media.

According to the townspeople, an analysis of the poisoned children shows that the closer they live to the plant, the higher the children’s blood lead level is.

Xiao Fenglan, director of Hengdong County Environmental Protection Bureau, responded to media enquiry on the lead poisoning, saying, “We cannot confirm whether the factory is the sole source [of the lead], we are not qualified [to affirm].”

The Mayor of Dapu Town made this public statement: “When children study at school, they chew on pencils while using them, which could also lead to excessive lead in their blood.”

The remarks triggered angry responses from Chinese netizens who condemned the officials for shirking responsibility and being shameless. Following are a few selected quotes.

“It is shameless for them to speak like this. Do people like this deserve to be officials?”

“Whenever there is a problem, instead of investigating the facts, they always look for excuses to shirk responsibility. Such officials bring disaster to the country and people.”

“Official, let me give you a common-known fact: the main ingredients in a pencil core is graphite. Pencils are made from the mixture of graphite and clay, it has nothing to do with lead.”

“This official is just too smart. His logic is: A pencil [in Chinese, literally translated as ‘lead pen’], if it didn’t contain lead, it wouldn’t be called a ‘lead pen’; therefore, it must contain lead … “

“[They] rush to shirk responsibility without even determining the cause.”

China expert Ma Tieying told Hong Kong’s Now TV that, years ago Hunan Province had a problem of heavy metal contaminated rice, causing 11 children to become sick. This time it involves the sickening of more than 300 children, yet a local official claims the children were chewing on their pencils.

Lead, even in small amounts, can cause serious health problems, according to a Mayo Clinic report. Children are especially vulnerable to lead poisoning, which can severely affect mental and physical development. Asymptomatic lead poisoning can permanently damage children’s brains.

Translated by Quincy Yu. With editing by Gisela Sommer.