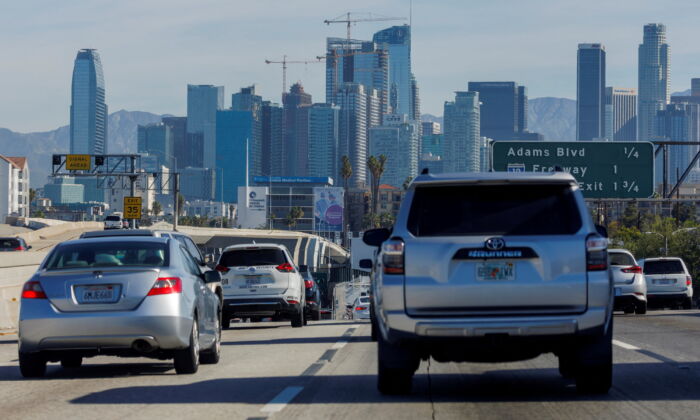 LOS ANGELES—As the Independence Day weekend approaches, southland freeways and airports started getting a lot busier Thursday with millions of residents traveling. For many, it is the first time they will hit the road in nearly two years.

According to the Auto Club, 2.7 million Southern Californians will drive to their destinations for the long weekend, while 426,000 will fly. About 168,000 will travel by other means, such as bus, train, or cruise ship.

“We expect the Independence Day holiday weekend to be the busiest we’ve had in more than two years, and we want to make sure our guests know about the tools available that can make every part of their journey easier and faster,” Justin Erbacci, CEO of Los Angeles World Airports, said in a statement.

Erbacci suggested a few things that can help the trip to start more smoothly.

“Spending just a few minutes online to check traffic conditions, pre-book parking and review any recent communications from your airline can ensure you have a great start or end to your summer vacation.”

At Ontario International Airport, passenger traffic is expected to be 13 percent higher than it was during the July 4 holiday period in 2019. More than 75,000 travelers are anticipated from July 1–5, an increase from 66,727 passengers who flew into and out of Ontario during the same period three years ago, according to Ontario International Airport Authority officials.

Across the country, 48 million people are expected to be traveling for the holiday, according to the Auto Club, with the vast majority reaching their destination by driving—despite near-record-high gas prices. As of June 30, the gas price in California is sitting at $6.289 for a gallon of regular, while the national average is sitting at $4.857 per gallon.

The top destinations for Southern California residents are expected to be Las Vegas, San Diego, the Grand Canyon, Mexico, and Yosemite.

Some people are also likely to be traveling overseas.

“We expect that the recent lifting of the COVID testing requirement for air passengers re-entering the U.S. will continue the increase in demand for international vacation bookings that we are already seeing this summer,” Heather Felix, the Auto Club’s vice president of travel products and services, said in a statement.