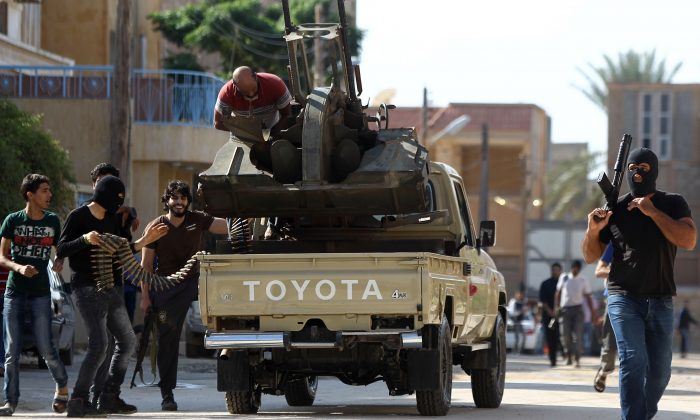 Armed civilians gather in the street during clashes with Islamist militiamen in the al-Lithi area of Libya's eastern coastal city of Benghazi on Nov. 2, 2014, after they suspected that an army personnel member who according to the civilians was kidnapped by Islamists is being hidden in the area. The previous day pro-government Libyan forces recaptured areas of second city Benghazi seized by Islamist militiamen, including army positions, military sources said as medics reported dozens killed in fighting. (Abdullah Doma/AFP/Getty Images)
Africa

Over 210 Killed in Fighting Over Libya’s Benghazi

CAIRO—At least 210 people were killed in fighting in Libya’s eastern city of Benghazi since troops loyal to the country’s elected government launched an attempt to re-take the city from Islamist militias two weeks earlier, a medical official said Sunday.

The official would not identify those killed, or say whether they included government troops, indicating that the battle for control of Benghazi has not yet been settled.

The turmoil in Benghazi started when renegade Gen. Khalifa Hifter — a former Gadhafi army chief who joined the opposition decades before the uprising — launched a campaign against Islamist militias which were implicated in series of assassinations and attacks on journalists, activists, and security forces in the city.

Hifter won support among large sectors of Libyans but the army units loosely allied with him were defeated and forced to leave the city by Islamist militias.

Then, the internationally recognized government, led by Abdullah al-Thinni, joined ranks with Hifter and on Oct. 15, launched a wide offensive to retake the city. Until then, Hifter troops had largely fought from bases outside the city.

On Sunday, a security official in Benghazi said government troops have entered a new neighborhood in the city. The official said the troops are carrying out a wave of arrests against Islamist militias and have arrested one of their spokesmen.

Both officials spoke on condition of anonymity because they weren’t authorized to brief reporters.

Libya is witnessing one of the worst spasms of violence since the downfall of longtime dictator Moammar Gadhafi. Powerful militias, who had fought to bring Gadhafi down, took control of the country, challenging the authority of central government.