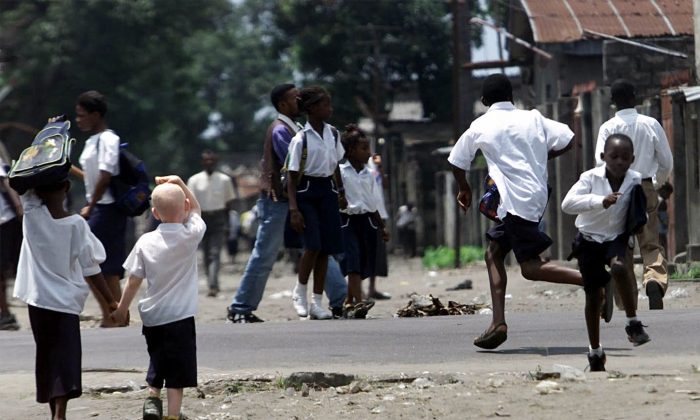 A young girl holds the hand of an albino boy as two other boys run across a road on their way back from school in Kinshasa, capital of Congo, Thursday Jan. 25, 2001. An article published in All Africa in October 2013 looks at the hardships an albino boy faces in the country, where the organs of albinos are hunted for witchcraft. (AP Photo/Christine Nesbitt)
International

Democratic Republic of Congo: Young Albino Forced to Flee His Home, On the Run From Witchcraft

BUJUMBURA—Anaclet smiles and looks lovingly at his young son, but the wind blowing off nearby Lake Tanganyika can’t cool his feverish mind. He worries deeply about the safety of Jeff, who is different from most people.

Father and son are refugees from Democratic Republic of the Congo, but they haven’t fled arbitrary violence or war like most of the hundreds of thousands of displaced people in the Great Lakes region. They are on the run because bad people want to kill six-year-old Jeff, so that they can harvest his organs for witchcraft. …

The problem is that Jeff is an albino, and this makes him a target. … In Burundi, the Democratic Republic of the Congo (DRC) and Tanzania, people living with albinism are sometimes hunted like wild animals or attacked by people who believe that their body parts have supernatural powers and bring protection, luck or wealth.

United Nations High Commissioner for Refugees via All Africa

Polygamy is a feature of traditional marriage in the country which is unique and must be preserved, a university academic says.
Prof John Y Luluaki from the University of Papua New Guinea Law School said the practice of polygamy was found in many societies in Papua New Guinea.

He said this during the underlying law conference in Port Moresby yesterday.

The conference was to discuss the underlying law which concerns the nature and application of customs in the country’s legal system. …

Some 30 million people are enslaved worldwide, trafficked into brothels, forced into manual labour, victims of debt bondage or even born into servitude, a global index on modern slavery showed on Thursday.

Almost half are in India, where slavery ranges from bonded labour in quarries and kilns to commercial sex exploitation, although the scourge exists in all 162 countries surveyed byWalk Free, an Australian-based rights group. …

Medium Jilian Lane, who has died aged 53, claimed to have met with the King of Pop under cover of darkness to help him with his relationships

A clairvoyant whose career took her from Barry to Beverly Hills to work with celebrities including Michael Jackson has died aged 53.

Jillian Lane, who claimed to be the number one celebrity psychic in Los Angeles, died on October 9 at the University Hospital of Wales. Her funeral will take place today.

Friend and colleague Dr Suzanne Yessayan, who will be reading the eulogy at the service in St Helen’s Catholic Church in Barry, said: “It is tragic. She had predicted her own passing and on this occasion, I hoped her prediction was wrong.” …

A group of angry people in Jahra protested demanding that cafes in Jahra should be closed and claimed that “immoral acts” take place at these cafes, especially the ones with closed cabins.

They protested against the cafes and said that they are spoiling the youth because men and women can mix freely with each other. According to Malaak, a supervisor at Classical Cafe, segregating men and women at cafes is not logical. “Ever since we launched our cafe 16 years ago, we have only segregated single people from families.

It’s not logical for us to separate a man from his wife and tell them to sit in different areas. If we did this, the cafe will have to shut down next,” he told the Kuwait Times. Even other Islamic conservative countries don’t apply this rule. “Saudi Arabia has a similar culture and is even more conservative than Kuwait.

This can be our model as it applies sharia strictly and they have mixed restaurants and cafes. So why should Kuwait apply such a weird rule?” he asked. Abdullah, a 26-year-old resident of Jahra agrees on closing cafes because he thinks that they don’t suit the society in Jahra.

Genghis Khan (Chinggis Khan) founded the Great Mongolian Empire. With his military he conquered nearly half of the world’s land. Since then, blue-stained Mongol descendants live in every corner of the world.

The descendants of Genghis Khan and the successors of the Great Mongolian Empire can also be found in India. The following is an interview with Dr. O. Nyamdavaa, who is the Head of The World Center for People of Mongol Origin, former ambassador for Mongolia in India, and he has spent about 40 years of his lifetime in India …

The decline of moose populations in certain parts of Ontario reflects a growing concern across some other parts of North America.

Moose populations are thinning out in certain parts of Ontario, mirroring a disturbing pattern across other parts of North America.

Why the numbers are dropping in certain areas — while they are climbing in others — isn’t known.

Wildlife officials in the northeast have suspended all moose hunting until research provides more answers. …