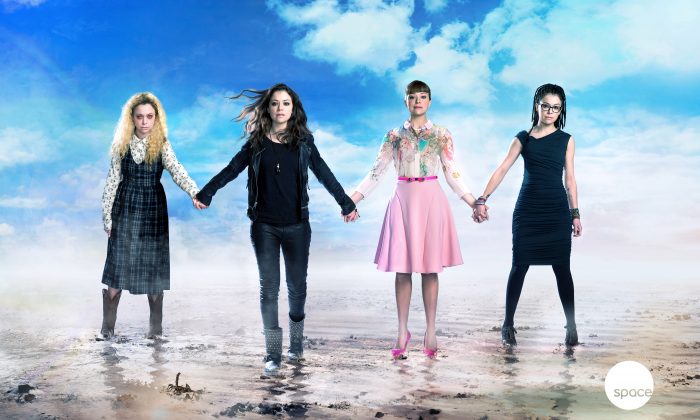 Some of the many characters Tatiana Maslany plays each week on Orphan Black: (L-R) Helena, Sarah, Alison, and Cosima. Maslany has finally been nominated for an Emmy, much to the delight of her fans. (Courtesy of Space channel)
Canadian Content

The nomination is seen as well overdue by her legions of fans, as the ability of the 29-year-old to convincingly play many clone-characters week after week is obvious to audiences and critics alike.

Because the clones were born to surrogate mothers across the globe, each has her own “look,” accent, and way of dealing with what life throws at her. Although they look alike, their personalities are strikingly different, with some being more likeable than others.

Helena has wild dyed-blonde hair that hasn’t seen a comb in months, brainiac Cosima has cornbraids and glasses, while soccer mom Alison sports bangs and dresses and acts more conservatively than the rest of the clones. And there are many, many others.

Their common bond is that they didn’t ask to be born so unnaturally and yet here they are working to stay alive because, as Alison explains to Sarah, another clone: “We’re clones, we’re someone’s experiment, and they’re killing us off.”

The ability of the 29-year-old to convincingly play many clone-characters week after week is obvious to audiences and critics alike.

The theme that binds the unique women, most of whom would not be used as main characters in more conventional shows, is an undeniable familial sensibility that they don’t seem aware of but that eventually bubbles to the surface.

What keeps Maslany on her toes is not only taking on the persona of so many different characters in each episode but also playing several characters in the same scene. This is accomplished by shooting scenes separately using a clone double and then inserting the various clones into the video to make the scene coherent. It calls for remarkable acting, which Maslany consistently delivers.

Maslany has said she uses music to help her get into character, and so has different playlists for each of them.

The show received a Peabody Award in 2013 for its complex plot lines that look at female identity, the ethics of genetic research on humans, nature versus nurture, and a fast-paced storyline that doesn’t let up from one episode to the next.

Commenting on her Emmy nomination, Maslany said in a statement, “The nomination is so surreal and exciting, mostly because of our fans and how voraciously supportive and protective they are of our show. They’ve totally championed us, and given us visibility and we are so grateful to them. So this nomination is for them. And I’m so grateful to the Academy for the nod.”

The date of the 2015 Primetime Emmy Awards show hasn’t been announced yet, but it will air some Sunday in September. Maslany’s fans will be waiting with bated breath to see if she wins for her “Orphan Black” roles.