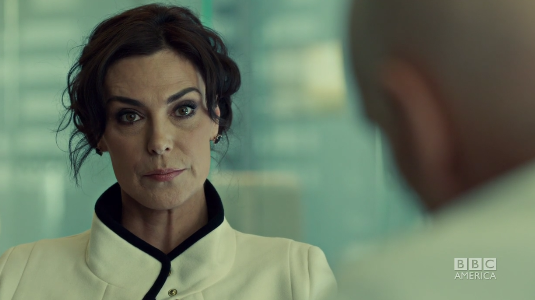 Action continues ramping up on Orphan Black season 2, and episode 7 on Saturday night will see the introduction of Rachel’s boss.

“I don’t know, but Sarah Manning tracked him down,” he says.

Marian asks how Rachel will take the news. Leekie hints that she may not stay loyal. “At one time I’d have counted on her to see the big picture.”

“If Rachel’s become too entangled, we have to step in,” Marian says, adding another twist to the series. The action was revealed in a preview video.

Meanwhile, it looks like Vic betrays Alison in rehab, threatening to expose the truth about Aynsley’s death.

“She goes into free fall on the eve of Family Day. With Donnie and the kids set to visit, it’s all clones on deck to contain the fallout,” the official description says. With Sarah appearing to be tied up with Mrs. S, Ethan, and Paul for the time being, the help will likely come from Cosima and Felix, and perhaps Delphine.