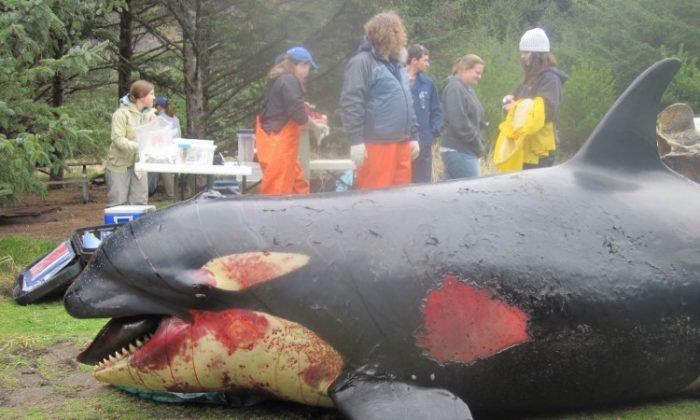 The battered body of 3-year-old L112, also known as both Sooke and Victoria, having been first sighted in Victoria Harbour, washed ashore near Long Beach, Wash., on Feb 11. The cause of death has yet to be determined. (Cascadia Research Collective)
US

Orca Suspected of Being Killed by Military Exercises Draws Ire

The call comes in relation to the death of a young southern resident known as “L112” whose bloodied body washed ashore near Long Beach, Wash., on Feb. 11, days after the naval frigate HMSC Ottawa had conducted training exercises in waters south of Victoria, British Columbia.

While the cause of death has yet to be determined, an initial necropsy showed that L112, also known both as “Victoria” and “Sooke,” died of “significant trauma.”

However, the biologists involved said the wounds were inconsistent with the 3-year-old whale having been struck by a ship or attacked by a predatory whale.

Ken Balcomb, a senior scientist with the Center for Whale Research in Friday Harbor, Wash., says it is also unlikely that L112 was killed by sonar, which at close range can have much the same effect as a bomb.

“L112 has injuries that are more consistent with an explosion—they were instantaneous and massive and lethal right away. So I believe in this case it’s a bomb blast rather than sonar.”

A letter from the British Columbia conservation groups to Canadian Defense Minister Peter MacKay requested that the navy disclose all information on activities in the area, including the use of sonar and explosives, which might have contributed to the whale’s death.

Navy public affairs said in a statement that training exercises in the Strait of Juan de Fuca on Feb. 6 did include “a period of sonar use and two small underwater charges.”

But mitigation rules were followed, and a required visual surveillance of the area prior to the blasts showed no marine mammals, the statement said.

However, the conservation groups, which include the David Suzuki Foundation and Living Oceans, believe some southern residents were in the area but may have gone undetected by the navy.

“Within 18 hours of sonar use, southern resident calls were heard in the area; within 36 hours, an unusually mixed group of members of two southern resident pods were sighted deep within the sheltered waters of Discovery Bay, west of Port Townsend, Wash.,” the letter said.

“There are no prior records of southern residents sighted in Discovery Bay in 22 years of observation. The unprecedented appearance of these whales in these waters, combined with their recorded vocalizations not long after the Ottawa’s training concluded, suggests that southern residents were present in the area—and may have been significantly affected by the exercise—but went completely undetected by the ship.”

The groups note that southern residents are known to fall completely silent when resting, sometimes for up to six hours, and can be difficult to sight even during the day beyond a few miles.

Military exercises are also routinely carried out in the area by the U.S. Navy, notes Balcomb.

He says he recently discovered that that the U.S. Navy “is authorized to drop about 100 bombs a year out there in the area where these whales feed, and they’ve been doing this for about 15 years.”

“There’s been a number of whales over the past years that have washed ashore with what’s usually described as blunt-force trauma. Many of them—and I’ve seen four myself—are consistent with a blast-type trauma of this nature,” he says.

Only about 87 southern resident killer whales, which inhabit British Columbia and Washington state waters, remain in the wild, and the loss of a young female represents a major productive impact on the population.

The conservation groups want the Canadian Navy to establish an exclusion zone that includes the Salish Sea where training with sonar, other high-intensity active acoustics, and explosives are prohibited.

The groups are also urging the Canadian Navy to work with the U.S. Navy to strengthen their mutual stewardship of the region’s marine wildlife.

The protection of killer whales’ critical habitat is mandated in both Canada and the United States. The southern resident population is listed as endangered under Canada’s Species at Risk Act, and is also on the U.S. Endangered Species list.

Balcomb, who served in the U.S. Navy, says he understands that military training is important, but doesn’t see why it has to take place in the whales’ critical habitat.

“Our government was a little remiss in issuing permits for the bombing,” he says. “I would like them to look at the evidence that we’re actually killing these whales with this bombing.”

The examination to determine what killed L112 could take several months.