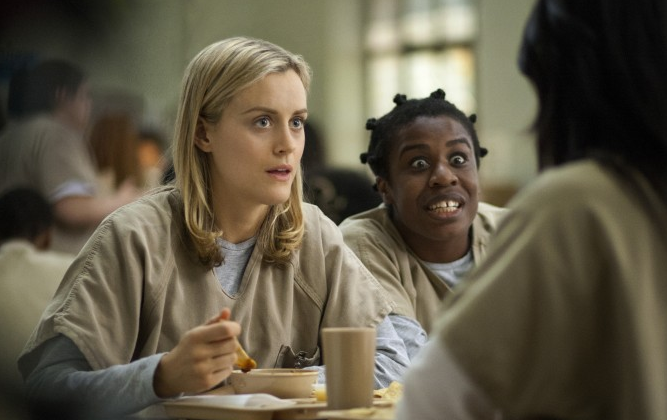 Taylor Schilling, left, and Uzo Aduba in a scene from "Orange Is the New Black." Season 2 debuted on Netflix on June 6, 2014; And a season 3 is in the works. (AP Photo/Netflix, Paul Schiraldi, file)
Entertainment

Orange is the New Black has been renewed for a season 3, and work has already begun on the next season as season 2 hit Netflix this week.

“On the eve of Orange Is The New Black Season 2, the cast are hard at work back on the set of #OITNB Season 3. How freaking cool is that?” the official Twitter account shared.

Star Laura Prepon first revealed that the show would be back for a season 3, posting a photo on Instagram that included a series of titles.

There’s no set release date yet but the season 1 was released to Netflix on July 11, 2013 and season 2 was released on June 6 of this year.

Netflix doesn’t release viewing figures but Orange is the New Black is said to be very popular and has also garnered critical success.

The series is based on Piper Kerman’s memoir about her experiences in prison. It revolves around Piper Chapman (Taylor Shilling) who is sentenced to 15 months in a women’s federal prison for transporting a suitcase full of drug money to her ex-girlfriend Alex Vause (Laura Prepon).

When she gets to prison she finds out that Alex is there too.