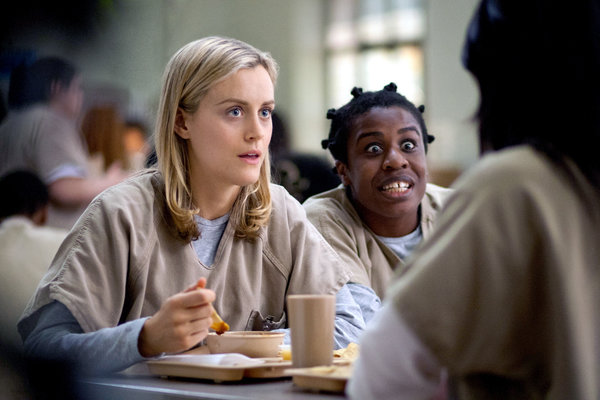 Orange is the New Black season 2 will premiere on Netflix on June 14.

Here’s what we know so far:

-Larry is going to do something after figuring out that he’s kind of a victim, Jason Biggs told Entertainment Weekly. At first, he wants to support Piper, but he realizes he needs to take care of himself. “But to what extreme, and how far should he take that exactly? Ultimately, he ends up taking advantage of Piper and the situation she’s in, and becomes a little greedy and a little questionable.”

Biggs elaborated to TVGuide that Larry will have to decide whether to reconcile with his former fiancee. “He loves Piper, but he doesn’t really know where to go from there. So beginning of Season 2 and throughout we’re going to see or at least explore if the damage that was done is irreparable or if they can work through this.”

-Laura Prepon (Alex Vause) will be back for season 2–just not all of it. However, BuzzFeed wrongly reported that Prepon will be in just four episodes. In fact, the series creator, Jenji Kohan, later said that Prepon will appear in most of the season.

-Taystee, recently back in prison after getting arrested following her release, is going to appear more often. ”I’m going to tease you a little bit about Taystee [in] season two—you’ll get more of me!” Danielle Brooks told Entertainment Weekly. “The only thing I can give you is that for me Taystee has shocked me for season two so I think people will be excited to see what she does in season two.”

-Poussey’s character will also be explored more. ”We will see Poussey’s back story so I hope people are excited about that. I’m excited about that,” Samira Wiley said. “We will see a lot more of her in prison. I feel like in season one, she’s really seen as the joyous sidekick for Taystee and that’s great,” she added. “She’s such a good friend and really good at that, but we’ll see really more of her, her morals, where her loyalty lies, who she is as a woman, all that kind of stuff.”

-Taryn Manning (Tiffany “Pennsatucky” Doggett) has been upgraded to a series regular, reported Deadline, so she’ll definitely be back.

-Jackie Cruz (Flaca) told Latina that she couldn’t reveal anything about season 2, except that it will be high quality. “Every episode is going to be wow! All I can tell you is that every episode is like Christmas.”

-Creator Jenji Kohan told TVGuide that this season will focus less on Piper. ”It’s becoming much more of an ensemble,” Kohan said. “As much as I love Piper and Taylor and her journey, I think people are interested in everybody’s journey.” That includes more of Crazy Eyes (Uzo Aduba). And more of the history behind Poussé (Samira Wiley) and Black Cindy (Adrienne Moore).

-John Bennett may or may not be doing more shirtless scenes. ”I don’t know if I could give any of that away,” Matt McGorry told Entertainment Weekly. “I don’t know if I can tell you any of that.” He did say that there will be more drama between Bennett and Dayanara. ”You can’t exactly have candlelight dinners,” McGorry said. “You’ll get to see Bennett sweat a lot.”

-Season 2 is going to be “wild,” Taryn Manning (Tiffanny ‘Pennsatucky’ Doggett) told Access Hollywood. “The show just continues to get wild and the writing is supreme,” she said. “You just get to peek in a little bit more into the characters and you really start to get to know other characters that maybe you didn’t get to know in Season 1.” She added that there are “all kinds of surprises in store.”