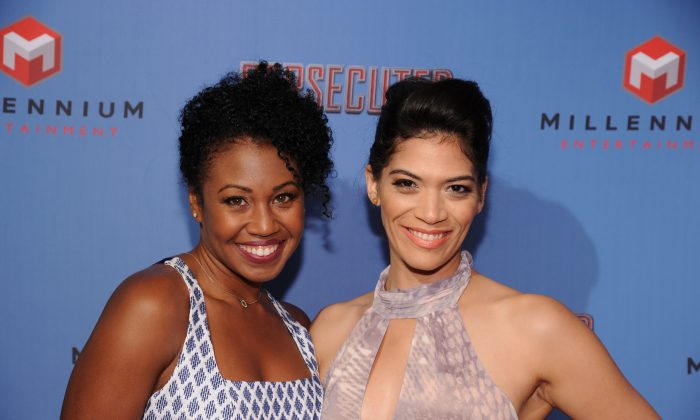 ‘Orange is the New Black’ Cast Talk Characters and Next Season

NEW YORK—”Orange is the New Black” cast members Laura Gómez and Tanya Wright say there’s a lot more of drama, comedy, and love in the new season and the upcoming episodes of the Netflix original series.

“We keep exploring the whole universe of the prison, the vitriol, and the universe around Piper,” Gómez said during a red carpet appearance for the premiere of the new drama “Persecuted,” which took place in Manhattan on July 18, 2014.

Gómez plays Blanca Flores in the current season of “Orange is the New Black.” She says that she can relate to how her character develops a defense mechanism and learns to pull through.

“I feel… prison forces certain people to go in a direction to protect themselves to survive,” she said.

Co-star Tanya Wright, who plays Crystal, said she learned from her character that love comes in many shapes and forms. “It’s a beautiful experience for me to play this role,” she said.

But both ladies agreed that being part of the “Orange is the New Black” team was a creative and exciting experience.

“This is an extraordinarily smart and creative team, and it’s a pleasure to be part of an ensemble that people seem to love so much,” Wright said. “It’s always fun on set,” Gómez added.

The 3rd season of “Orange is the New Black” will premiere in 2015. Since even the actors are not told ahead of time what’s coming up in the season, they are limited in what they can share.

“We don’t know what’s happening three episodes from this one,” Gómez said.

In the upcoming seasons the audience can expect to see “more orange,” according to Gómez.