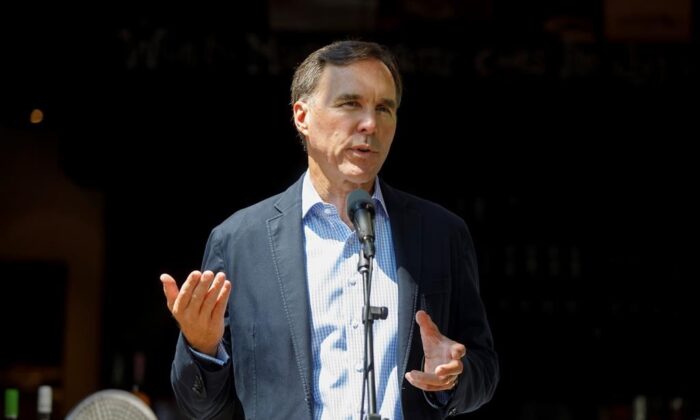 Canada's Minister of Finance Bill Morneau speaks to media during a press conference in Toronto, on July 17, 2020. (The Canadian Press/Cole Burston)
Canada

Opposition parties are asking the federal ethics watchdog to widen his probe of Bill Morneau regarding the WE organization as the finance minister continues to face calls for his resignation.

Conservatives and New Democrats have written to Ethics Commissioner Mario Dion to probe trips Morneau took three years ago, part of which were paid for by the WE organization.

During a finance committee hearing on Wednesday, Morneau admitted that he had just repaid WE Charity more than $41,000 for expenses the organization covered for trips his family took to Kenya and Ecuador in 2017 to see some of its humanitarian work.

WE said the Morneau family trips were meant to be complimentary, part of a practice of showing donors the charity’s work to encourage them to give more.

Conservative finance critic Pierre Poilievre said the trips violated several sections of the conflict of interest law that prohibit ministers or their families from accepting paid travel, adding that Morneau should resign his ministerial post.

NDP MP Charlie Angus told Dion in a letter that the trips bring “to another level” concerns about Morneau’s involvement in handing WE a contract to run a $912-million student volunteer program.

The federal ethics watchdog is investigating both Prime Minister Justin Trudeau’s and Morneau’s role in giving the WE organization a contract to run the Canada Student Service Grant, which the government presented as a way to help students with education expenses as they faced a summer of unemployment in a COVID-19-stricken economy.

The contract would have paid the organization about $43.5 million.

Meanwhile, Trudeau is being called to testify at a second committee, on the same day his office confirmed he would testify at the federal finance committee.

The House of Commons ethics committee passed a vote late Wednesday calling on the prime minister to testify on the WE Charity scandal.

Trudeau’s office confirmed on Wednesday that he would testify before the federal finance committee probing the aborted agreement, a rare move for a prime minister. His chief of staff, Katie Telford, will also testify.

Trudeau’s office said exact times and dates for those appearances have yet to be set.