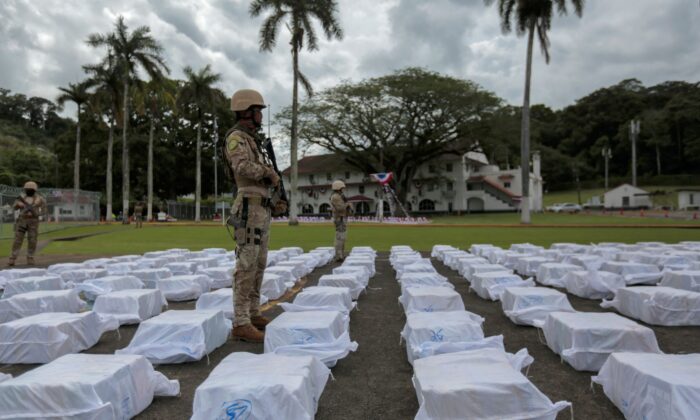 Members of the National Aeronaval Service (SENAN) guard drug packages as they are displayed during a press conference at a base in Panama City on Oct. 30, 2021. (Rogelio Figueroa/AFP via Getty Images)
Thinking About China

CCP’s Drug Warfare and Other Illegal Activities in Latin America

The Trump administration’s 2017 National Security Strategy (NSS) called out the Chinese Communist Party (CCP) for its many nefarious and insidious activities against the United States and the Western Hemisphere, including transnational criminal organizations and Chinese fentanyl traffickers.

Chinese fentanyl traffickers, along with drug cartels, feed the illicit opioid epidemic, which “kills tens of thousands of Americans each year,” according to the report.

(Note: The Biden administration hasn’t published an NSS yet.)

Legal Trade: China Versus US

The CCP has made major inroads into Latin America, literally. Of the 31 Latin American countries, 20 are part of the CCP’s Belt and Road Initiative’s $160 billion investment. In 2021, China’s Latin American trade exceeded $400 billion, compared to just $295 billion for the United States.

Latin America is rich in natural resources. It includes the Amazon region—the world’s largest forest and jungle. Many Latin American countries depend on mining as a major source of exports.

The CCP is leveraging its superior economic influence in Latin America to demonstrate that it’s winning Latin American hearts and minds, as well as capturing their elites politically and economically.

In recent interviews, U.S. Sen. Bill Hagerty (R-Tenn.) said, “This is our hemisphere that we’re talking about. China is literally eating our lunch.”

Not only is the CCP “eating our lunch,” but the CCP also aids and abets Chinese criminal groups in Latin America that conduct drug warfare against the United States.

Maria Zuppello recently wrote an article in Militant Wire documenting many illicit activities that Chinese criminal groups conduct throughout Latin America. She described the breadth and depth of the illegal drug trade in fentanyl, marijuana, and the emerging market of “non-fentanyl synthetic opioids such as nitazenes, also known as benzimidazole opioids such as the synthetic opioid derivative isotonitazene (ISO), which are 20 times more potent than fentanyl.”

I interviewed her about her research and its implications. The Chinese Mafia is known throughout the region generically as Red Dragon. Some of the more prominent groups (Chinese triads) are A.C., Pi Xiu, Panda, Wan Ke, and Xin. Some gangs have Spanish names, such as “Amistad” (Spanish for “friendship”). In the tri-border area of Argentina, Brazil, and Paraguay, Chinese gangs Fuk Ching, Flying Dragons, and Tai Chen engage in human trafficking.

Fentanyl is the leading cause of death among U.S. adults between the ages of 18 and 45. Fentanyl has killed more Americans in this age group than COVID-19.

According to U.S. Rep. Greg Murphy (R-N.C.) (the only serving member of the House of Representatives who’s a surgeon), from April 2020 to April 2021, the following deaths were reported in the 18-to-45 age range:

Had the CCP enforced its own laws on trafficking illegal narcotics against Chinese crime groups smuggling fentanyl or its precursor chemicals to Mexico, the CCP could have prevented many of these fentanyl-related deaths.

Drug cartels are profit-maximizing organizations; drug potency and production costs are key factors in choosing which drugs to produce and distribute. Fentanyl is cheaper than heroin to produce, and is 50 times more potent than heroin. Drug cartels have smuggled so much fentanyl into the United States that the price has dropped by 50 percent since 2020.

The Biden administration’s policy to relax or eliminate restrictions on transit between Mexico and the United States has also benefited drug traffickers. In 2021, the Drug Enforcement Agency seized “11,201 pounds of fentanyl—a 134 percent increase from fiscal year 2020, and a 400 percent increase since fiscal year 2018,” Murphy wrote in an op-ed for The Daily Advance.

The CCP supports both licit and illicit activity in Latin America. As the region’s electoral politics move left (as seen recently in elections in Colombia and possibly in Brazil this fall), the CCP gains a stronger foothold. In effect, Latin Americans who prefer the United States over China find it difficult to oppose CCP penetration into Latin America’s political, economic, social, and illicit systems.

The following are selected reports of activities cited by Zuppello of Chinese-organized criminal groups in Latin America.

“Chilean officials arrested thirteen Chinese nationals in Santiago in September 2021 for cultivation and trafficking, confiscating over 1,600 marijuana plants,” Zupello wrote. “The network operated between Valparaiso and the capital. A few months earlier, authorities had uncovered over 1,500 plants and 250 kilograms of product in San Antonio, Valparaiso.”

She noted that Sergio Muñoz, head of Chile’s civil police, said, “We also found guns, cocaine hydrochloride, cocaine paste, and ecstasy and uncovered a vast array of offenses associated with this network, ranging from prostitution to money laundering.”

Zuppello pointed out that “Brazilian police investigation revealed that the First Command of the Capital (PCC) used a Chinese accountant and Chinese smugglers to launder money through front companies that were continuously opened and shut. In 2015, Brazilian authorities uncovered that the PCC transferred over $20 million to bank accounts in the U.S. and China.”

Zuppello noted that “in October 2020, the US Justice Department unsealed an indictment accusing six Chinese nationals of laundering approximately $30 million for Mexican drug traffickers over 12 years. US authorities convicted Chinese national Xianbing Gan, a resident of Guadalajara, Mexico, to 14 years in prison in April 2021 for laundering more than $500,000 from Mexican cartels into Chinese banks. However, according to the judges, Gan handled a larger sum, between $25 million and $65 million over a period of two years.”

Zuppello reported that “cigarettes manufactured in China are the most trafficked items in almost all of Latin America.”

The CCP has several faces it shows to the world. The most common is that of an aggressive expansionist state that exploits the natural resources of other countries, builds infrastructure to extract those natural resources, and transports them to China. The CCP’s connection to criminal groups and illicit businesses is less known. These two faces allow the CCP to coerce global elites to comply with the CCP’s strategic objectives.

“The left-wing political momentum in Chile, Peru, Bolivia, Argentina, Colombia, and most likely Brazil following their 2022 presidential elections, will boost anti-US sentiments and, conversely, strengthen commercial and political ties with China. As a result, some Chinese criminal elements will increase their penetration into local economies accompanying the more legitimate and legal Chinese commercial activity.”

In late June 2022, Colombia elected a left-wing government; its leader is a former member of M-19 (an international criminal cartel).

Chinese organized crime is one of the CCP’s tools to achieve global dominance. In the 1999 book “Unrestricted Warfare,” two People’s Liberation Army Air Force colonels said drug warfare, one of 24 types of warfare, is “obtaining sudden and huge illicit profits by spreading disaster in other countries.”

The CCP executes this drug warfare to achieve the objective of spreading disaster in the United States and other countries, such as killing more than 64,000 young adults every year through fentanyl. Since 1999, the CCP has found many means to conduct illicit warfare.

We should take note of their nefarious activities and act to counter them. The Biden administration has no feasible plan or strategy to keep Latin America from the CCP’s licit and illicit designs and no plan to curtail the murderous drug trafficking occurring on our southern “open” border. Let’s hope this is a temporary problem and that a “reset” will happen soon.

Other countries worldwide should be aware of communist China’s use of illicit criminal groups to achieve its strategic objectives. These Chinese criminal groups pose more than a law enforcement challenge—they’re a national security threat to any country.