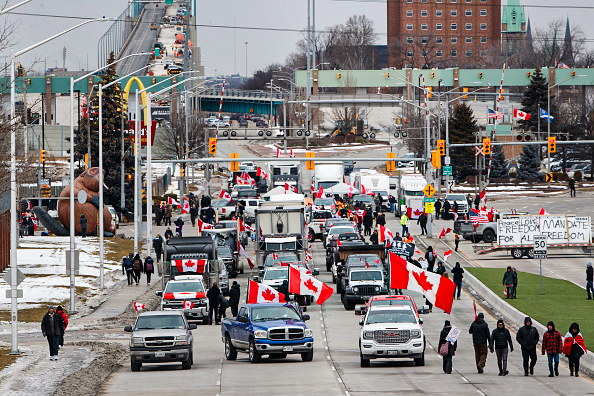 Protestors and supporters set up at a blockade at the foot of the Ambassador Bridge, sealing off the flow of commercial traffic over the bridge into Canada from Detroit, in Windsor, Ontario, on Feb. 10, 2022. (Cole Burston/Getty Images)
Canada

TORONTO—Ontario Premier Doug Ford has declared a state of emergency in his province over the ongoing trucker protests in Ottawa and the border blockage in Windsor, Ont.

During a press conference on Friday, Ford said he will enact orders to make it “crystal clear” that it is illegal and punishable to block and impede the movement of goods, people, and services along critical infrastructure.

“The Ambassador Bridge in Windsor alone sees more than $700 million of two way trade every single day, and that trade employs hundreds of thousands of Ontarians who work in auto plants and factories across our great province,” Ford said.

“Those jobs feed millions of families. They are the lifeline for our province and its economy. And while I appreciate the right to protest, that right cannot and must not extend to cutting off that lifeline.”

Fines for non-compliance will be up to $100,000 and up to a year imprisonment, Ford said, adding that the provincial government will also provide additional authority for the police to take away the personal and commercial licences of anyone who doesn’t comply with these orders.

Ford said while the emergency measures are “temporary,” the government has “every intention” to bring new legislation forward to make them permanent in law.

Solicitor General Sylvia Jones said that although the initial declaration of a state of emergency is 42 hours, further amendments to deal with the “safety problems” of people protesting on public highways can be expected in the spring legislative session.

The Freedom Convoy protests began as an attempt to end to mandatory COVID-19 vaccination requirement for cross-border truck drivers, but mushroomed as people from across the country joined to oppose all mandates and restrictions.

The first convoys converged in Ottawa on Jan. 29, and many protesters have indicated they will stay until COVID-19 mandates are lifted.

Separately, convoys of trucks and other vehicles have set up blockages at major Canada-U.S. border crossings, including the Ambassador Bridge connecting Windsor to Detroit, the Emerson border crossing in Manitoba, and the border crossing at Coutts in southern Alberta.

Ford noted that the government is also “going after” the money funding the protests, referring to the Ontario Superior Court of Justice’s Feb. 10 order to freeze all donations made through the “Freedom Convoy 2022” and “Adopt a trucker” campaigns on the fundraising platform GiveSendGo.

A statement from Ford’s office said Ontario Attorney General Doug Downey brought forward the application for the order, in which 490.8 of the Criminal Code was cited as grounds to freeze the funds. The section reads, in part: “The Attorney General may make an application … for a restraint order … in respect of any offence-related property.”

In an apparent response, GiveSendGo said on Twitter: “Know this! Canada has absolutely ZERO jurisdiction over how we manage our funds here at GiveSendGo. All funds for EVERY campaign on GiveSendGo flow directly to the recipients of those campaigns, not least of which is The Freedom Convoy campaign.”

Know this! Canada has absolutely ZERO jurisdiction over how we manage our funds here at GiveSendGo. All funds for EVERY campaign on GiveSendGo flow directly to the recipients of those campaigns, not least of which is The Freedom Convoy campaign.

Several U.S. Republicans raised concerns about GoFundMe’s removal of the funds for the trucker protest.

Mimi Nguyen Ly and The Canadian Press contributed to this report.