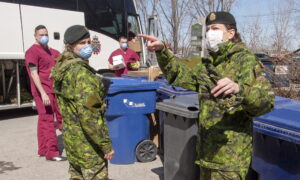 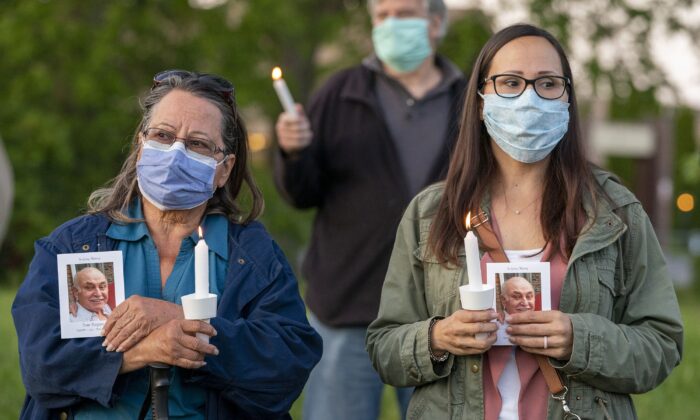 People participate in a vigil for COVID-19 victims at the Orchard Villa long-term care home in Pickering, Ont. on June 15, 2020. (The Canadian Press/Frank Gunn)
Canada

Two promising areas of change for Ontario long-term care homes since the pandemic are the creation of isolation spaces for residents in congregate settings who show signs or test positive for COVID-19, and the introduction of Bill 203, or the More than a Visitor Act.

Introduced by the New Democrats and backed by the Progressive Conservative government, Bill 203 has passed second reading and been referred to the Standing Committee on Social Policy for review. After that there must be another vote in the house before it can become law.

“It looks like it’s very hopeful that this bill will be passed into law,” Wendy Francis, host of the Long-Term Care Chronicles podcast, said in an interview. “This would provide that you would have no restriction, outbreak or not. … This is huge.”

The legislation would grant designated caregivers, including a family member, neighbour, friend, or support person access to residents throughout a pandemic—something that was banned for over six months during the lockdown.

“Family members must be at the table … they are a stakeholder,” says Francis. “You cannot restrict family members. They need to be in [the facility] whether there’s an outbreak or not.”

As for a solution to the problems plaguing many long-term care homes that have come to light since the pandemic, Francis says that from both the interviews she conducts for her show and the buzz among various advocacy groups, “everyone is going for a national standard, and that if the funds are going to come from the federal government that transfers payments to the province, there needs to be stipulations assigned to the funds.”

Five Liberal MPs in Ontario have called on the federal government to work with provinces to establish national standards for long-term care homes across Canada.

As the reported cases of COVID-19 continue rising, the independent commission investigating the spread of the virus in Ontario’s long-term care system has called for changes such as increased staffing and improved infection control.

The Long-Term Care COVID-19 Commission recently recommended that there be an average of four hours of direct care per resident per day, and that a dedicated staff member who would be responsible for infection prevention and control be appointed in every long-term care home.

On Nov. 2, Premier Doug Ford announced a plan to increase the time staff and personal support workers will spend with long-term care residents to an average of four hours of direct care per day by 2024-25.

During the initial months of the pandemic, COVID-19 spread rapidly across many long-term care homes and retirement facilities across the country, leading to nearly 8,454 COVID-related deaths as of June 23, according to the Public Health Agency of Canada.

Some of the most hard-hit were in Quebec and Ontario.

Debbie McGregor’s mother, Doris Tofflemire, died in April at age 92 at a long-term care home, with her family only discovering that she was positive for COVID-19 after her death.

McGregor reluctantly joined a class-action suit that was filed against the facility in May. She says she’s not the type to resort to legal action, but she felt compelled to join the lawsuit in the hopes it will bring about change.

“I don’t normally do things this way, but I just feel we have to speak up,” she says.

Tofflemire became a resident of the facility in Ajax, Ont., in March 2017. McGregor says that because her mother was “very mentally aware,” she was able to often give her daughter first-hand accounts of what she witnessed.

“There were enough significant incidents that happened when my mom was there that brought some big concerns to the table for sure,” she says.

“Attention has to be drawn to what is happening there, (and) I think how I can honour my mom. One of the things that was said to me by the staff was that she was an advocate for the people that were there. Maybe I can continue that on.”

After the Canadian Armed Forces were deployed to five struggling long-term care homes in Ontario in the spring, a subsequent report documented grave problems with substandard care. It found that fallen and wounded residents were often ignored, that delayed changing of soiled diapers led to skin breakdown, and that pandemic protocols were not being followed, among other issues such as understaffing, underfunding, and poor infection control.

Although the long-term care sector’s problems are not new, it took the crisis of the pandemic to bring them to the fore and prompt action, and that’s “because lot of people saw the suffering,” says Francis.

“They saw the wrong, and I think that’s what hurt a lot of people on a moral level—to know that in this first-world country that’s a part of the G8, this shouldn’t be happening in Canada.”