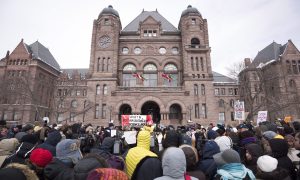 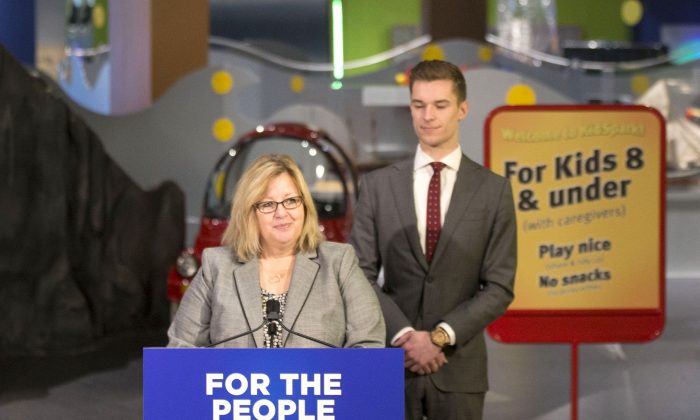 Ontario Education Minister Lisa Thompson stands alongside Parliamentary Assistant Sam Oosterhoff as she announces an update to the province’s education program at the Ontario Science Centre in Toronto on March 15, 2019. (THE CANADIAN PRESS/Chris Young)
Canada

The Ontario government has announced an update to the province’s education program, but critics say the sex-ed curriculum remains largely the same as the one from 2015, which many parents objected to for including gender identity theory, among other controversial topics.

At a March 15 news conference in Toronto, Education Minister Lisa Thompson said there will be a modernized “age-appropriate” sex-education curriculum as a result of consultations with parents and the public; however, all the concepts from the 2015 curriculum would be still be taught.

The 2015 curriculum, brought in by the previous government under Kathleen Wynne, drew criticism for exposing children to material that was inappropriate for their age. The Ford government scrapped that curriculum in 2018 citing concerns from parents, and promised to craft an age-appropriate version based on consultations with parents and the public.

The update means children from grade one to eight will now learn about mental health and concussions. Consent, online safety, and family and healthy relationships will be taught from the second grade onward while new information on cannabis will be taught starting in grade six.

Students will now begin learning about sexual orientation in grade five rather than grade six. Gender identity and gender expression will be taught in the second half of grade eight rather than beginning in grade six. This would be considered mandatory material, Thompson said.

Thompson noted, however, that there’s an opt-out policy for parents who are uncomfortable with their children learning a particular piece of the new curriculum.

“We need to respect parents as the primary educators of their children,” she said. “So if there’s something happening in grade one or grade two a parent is uncomfortable with, they need to work with their teacher and their principal on the opt-out option that we’ve presented through this plan.”

Despite the choice to opt out, the changes don’t go nearly far enough for Tanya Granic Allen, president of Parents as First Educators, which has long been a critic of the 2015 curriculum.

She says the new curriculum is almost identical to the 2015 one, noting that Premier Doug Ford’s promised to drop gender identity theory from the Ontario curriculum back in February 2018.

“What does he think today about ‘gender identity theory’? Does he believe it’s not longer ‘liberal ideology’? What happened to change his mind?” she said in a press release.

Jack Fonseca with Campaign Life Coalition (CLC), which also opposes the 2015 curriculum, says allowing parents to opt out their children from “these anti-scientific lessons” is not sufficient.

“Why should our children be made to feel ostracized when they have to leave the class or stay home on certain days? It’s more fair and easier on everyone to just leave this controversial ideology out of the classroom. Let those who believe in it teach it to their own kids at home,” he said.

CLC national president Jeff Gunnarson repeated his organization’s prior call for Ford to fire Thompson as education minister, and called on Ford to keep his promise.

“While Thompson owns the education file, the fact of the matter is the buck stops with Premier Ford. He must intervene and remove transgender ideology lessons from the elementary and high school curriculum,” he said.

The government is still defining and testing the new curriculum. It is expected to be released in late May for the new school year starting in September.

Thompson also announced changes to the math curriculum, which will see “discovery math” scrapped in favour of past methods of teaching the subject. Over the next four years, a new math curriculum for all students in all grades will be phased in.

Classroom sizes will also change for intermediate and high school classes over the next four years, Thompson said, but was quick to add that no teacher would be out of a job because of the change.